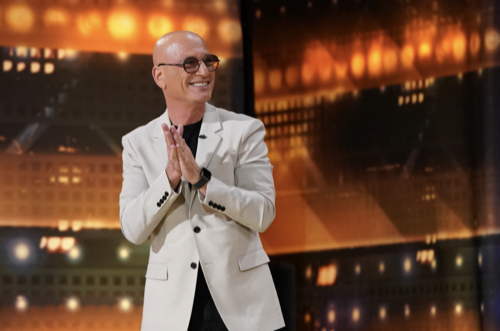 Tonight on NBC America’s Got Talent begins with an all-new Tuesday, June 1, 2021, episode and we have your America’s Got Talent recap below! On tonight’s AGT season 16 episode 2 “Auditions 2″, as per the NBC synopsis, “The auditions continue with creator and executive producer Simon Cowell at the judges’ table along with Heidi Klum, Howie Mandel, Sofia Vergara and host Terry Crews.

A variety of acts and contestants of all ages audition for the chance to win the $1 million prize. The Golden Buzzer is back, allowing select lucky acts the chance to go directly to the live shows to compete for America’s vote.”

In tonight’s America’s Got Talent episode, the episode begins with the judges coming on stage; Simon Cowell, Howie Mandel, Heidi Klum, and Sofia Vergara. Host Terry Crews says the audience is electrifying. Simon says that every billboard on the strip has someone who began on AGT.

Beyond Belief – a tween dance troupe from Mesquite, Texas. The group is led by Justin Johnson aka RuPaul Drag Race star, Alyssa Edwards.

Judges’ Comment: Simon: “I think this act was sensational, I really loved you. If you win a million dollars what will you do with it? (one little girl says she has spina bifida and would probably spend it on medical bills). You’ve got good friends up there.” Sofia: “It was out of this world, I wished the song was longer, I tried to focus on each one of you. I couldn’t get enough of you guys, I loved it.” Howie: “Fierce, you are superstars. (one little girl is crying because she is excited) I am excited to meet you.” Heidi: “You could not have done it better, even down to the nails. I am a stickler for details.”

Four yes vote from the judges, they are going through.

Unicycle Flow is a Japanese unicycle group. This is only four members today, but they are in fact a group of twelve.

Judges’ Comments: Sofia: “The energy, the music, it all worked together. It was so exciting.” Howie: “Traditionally you see someone on a unicycle, you see a clown or a juggler. You brought beautiful dance and we have never seen that before. What a great example for Simon Cowell to see that one wheel you can balance.” Heidi: “I loved it too, I loved the choreography, you were all so in synch and so fast, it was absolutely incredible.” Simon: “It was amazing with just four. This is one of the most unique acts we have seen on AGT over years, I was blown away, sensational.”

Larger Than Life is a boy band from New York. The big dream is to get a golden buzzer and their name in lights. (it doesn’t take long for Simon to hit his red buzzer)

Judges’ Comments: Heidi: “I was so rooting for you guys, when you came in I loved your energy. But you didn’t sound so great and I want it too.” Sofia: “Unfortunately, it was forced and that was a big problem.” Simon: “I would just stop right now, honestly, without being rude. It is hard enough when you are good when you are terrible, I am just trying to be kind, give it up.”

This group does not make it through to the next level.

Korean Soul are not well known in Korea, this is their big opportunity. They really want to be pop stars. The poor guys watched the Larger Than Life bomb just before them.

Judges’ Comments: Howie: “Amazing. What is it in Korean culture that makes so many talented people? You guys check a lot of the boxes that you need to check to make it and you sounded great, I loved it.” Heidi: “It sounded great, super silky smooth, the harmonies were great, you guys looked great, I loved the color arrangements. Thumps up for fashion.” Sofia: “You guys make a great group together I think it is perfect. You have all the talent, everything, I thought it was spectacular.” Simon: “Probably one of the best auditions that we have had today. The harmonies were great, the song choice was great. “

Four yes vote from the judges, they are going through.

Matt Johnson is 47 and he is an escape artist. He says he hung himself and almost drowned a year ago in a stunt, but he is here to face his fears. Tonight’s performance he has never done before, he just tried it out yesterday.

Judges’ Comments: Simon: “Anyone who puts himself in this position, things can go wrong and catastrophic, you are brilliant. (Simon gives him a standing ovation) Respect. Your wife is going to hate me, I want to see you again.” Sofia: “That was insane and looked so dangerous. My stomach still hurts because I was so nervous for you.” Heidi: “It was so close and crazy, you should listen to your wife a little more and stop.” Howie: “I am actually speechless, I have never been more scared looking at this contraption.”

Four yes votes from the judges, he is going through.

Patrick K. from Pittsburgh is a magician and sold his soul a long time ago. Patrick goes down the stage near the judges and does a card trick.

Judges’ Comments: Heidi: “That was incredible, it was happening right in front of our eyes, this close, how on earth did you do this. You are good.” Sofia: “That was special, mind-blowing, right in front of us. You are amazing.” Simon: “There are certain things that cannot be explained which means It is magic. I do believe in magic. I like your whole presentation, it was cool and really well done.” Howie: “I hope you win.”

Four yes votes from the judges, he is going through.

The Curtis Family C-Notes – Family band from San Francisco who looked like they dropped out of the ’70s. They perform, “I Was Made To Love Her,” by Stevie Wonder. Dad was one of the youngest piano players for the Duke Ellington orchestra, signed by Earth, Wind, and Fire; the kids’ first teacher, he plays all the instruments.

Judges’ Comments: Howie: “You are a beautiful family, gorgeous and I loved your performance. You guys are superstars and you inspire me.” Heidi: “I hoped you sounded as good as you looked, and you did. I loved it and mama knows how to sing.” Sofia: “Everything was perfect, I would love to see you again. I think you guys are on the right track.” Simon: “There are times when we see these families and you can see the kids having the worst time, this was the opposite, everyone was having a great time. I am so happy you came on our show.”

Four yes votes from the judges, the family is going through to the next round.

Danny Dechi is a comic from San Francisco. He uses a pencil and drums it on his cheek, the four judges hit the red X buzzer and he leaves the stage.

Les beaux Freres is a comedy circus troupe who dance with towels, they are French Canadian.

Judges’ Comments: Howie: “I loved this, it was funny and I want you to keep going, don’t throw in the towel.” Heidi: “I think that is my cup of tea, it was a wow for me. That is my kind of humor.” Sofia: “I thought it was fantastic, I can’t wait to see what else you are going to take off.” Simon: “That is a surprise, it was very funny. I don’t know where you go with this, but it was hilarious.”

Four yes votes for these Canadians to move on to the next round.

Gina is from Bronx, New York and she is a comedian.

Judges’ Comments: Sofia: “That was so amazing, I laughed at every joke you made. Your energy, everything, I loved it.” Simon: “I felt like you were just having a conversation with us. It wasn’t like a routine.” Heidi: “I wish your husband was standing right here when you were talking about him. You were hilarious.” Howie: “You are funny, I don’t want to talk, I don’t want to interrupt you. You are beautiful, natural, and check every box that a comedian has to check.”

Jane goes by the name Nightbird, she sings and is thirty years old. She is singing an original song called, “it’s ok.”

Judges’ Comments: Howie: “That felt like the most authentic thing this season.” Sofia: “That was surprisingly beautiful. It was powerful and heartfelt.” Heidi: “You gave me chills, it was so beautiful to listen to.” Simon: “Your voice is stunning, there is something about that song, you casually told us what you are going through.” Simon is really touched by the performance, he wipes away a tear and collects himself, he hits the golden buzzer.