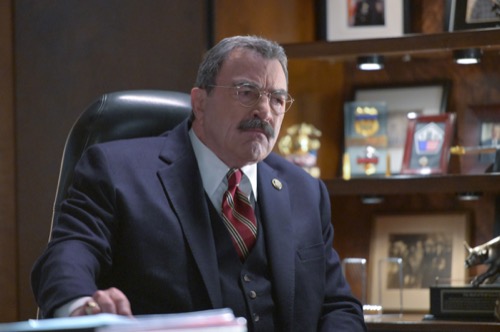 Tonight on CBS their hit drama starring Tom Selleck Blue Bloods airs an all-new Friday, May 7, 2021, episode and we have your Blue Bloods recap below. On tonight’s Blue Bloods Season 11 Episode 14 “The New You,” as per the CBS synopsis, “Frank and the Deputy Commissioner of Press Information, Garrett Moore (Gregory Jbara), quarrel when Garrett refuses to walk back a quote he provided to a local newspaper.

Also, Danny and Baez discover a connection to a feud between local residents and city-sponsored hotels for the homeless while investigating a murder, Anthony is mistaken for a mafioso, and Eddie pressures Jamie to take a love language quiz.”

In tonight’s Blue Blood episode, the episode begins with a man, Elon Lubin, jogging in the park and sees a man laying on the side in the grass who looks dead. Baez and Danny are on the scene, Malone says there is a DOA under the bushes, no ID, no personal property. They talk to Lubin, this is his typical jogging route, but he doesn’t know the deceased. He says he called 911 immediately. He thinks the guy might be from the Grand Hotel, the city turned it into a homeless shelter after COVID.

Erin Is in the office with Anthony, he asks her if he looks like a cop, she says maybe, but he looks more like a baseball umpire. He says a clown at the bar last night took one look at him and thought he was a mobster. He was minding his own business, a guy sits down by him and asks like he is a wise guy, he asks him to kill his wife.

Frank is with Abigail, Sid and Garrett are there. Sid tells Garrett he threw the boss under the boss. Abigail picks up the New York Post on Frank’s desk, the cover has his photo and Garrett’s and it reads, “One more thin, to be Frank, we can do better.” Garrett says what was he supposed to say, that they were perfect. Frank says it is hard enough for their people out there than with having Garrett slap them around, he tells him to walk it back.

Baez and Danny head to the Grand Hotel, Baez says when she stayed there it was a thousand bucks a night. They head to the desk and the lady there, Winnie, recognizes the dead man as Billy Rutledge. She says he stayed there quite a bit, but he stayed in the park a lot too. Baez tells her that he was found in the park dead. A woman there says Billy once said something about St. Louis.

Danny tells Baez that Elon has found three deceased homeless people in the last year, maybe not a coincidence at all.

Eddie and Jamie are out shopping together. They are talking about love language is and Jamie says he has no interest in it.

We see our jogger, Elon Lubin, who is organizing a protest, he outside the Grand Hotel and says the neighborhood used to be a quiet family community and it is now overrun by homeless vagrants, and it is time for the city to shut the place down. Baez and Danny go pay Elon a visit, he doesn’t look surprised to see them, he says the cops always jump to conclusions. Elon says he didn’t do anything.

Baez and Danny have Leon in an interview room, he picks up his phone and says he is going to record their conversation, if they are recording, so is he. They chat for a bit, but Danny marches him out quickly. Danny says that Leon said he was looking at his smartwatch when he noticed the dead body. Then his app was tracking him with GPS, all they have to do is look at his phone to see what he was doing before he got there.

Garrett goes in to see Frank, he tells them that it is a mistake to walk his comments back. His job is to do what is best for Frank and the department. He tells Frank that he should put his ego away.

Frank goes into Erin’s office, Anthony is there and Frank is there to see him. Erin asks him what the case is. Danny says there is a guy who pretends to care about the homeless and the poor, then he coincidentally finds three homeless dead bodies.

Eddie and Jamie are in the station, she is talking to a woman and man, she looks like she is giving them relationship advice. Jamie calls her out of the room and tells her to stop trying to teach them something out of a fashion magazine.

Danny is jogging near Elon, he gives him a warrant for his phone and takes it.

Anthony meets with the man who asked him to kill his wife. He says he has been married for a long time, he married the love of his life and she started changing, she is sleeping with his brother. He says he wasted Anthony’s time, he doesn’t want to kill his wife, he still loves her.

At the station, they trace Elon’s phone, two and half hour run, no stops, no detours.

Abigail and Sid go to see Garrett, they tell him that he is going to get himself fired, get back in shape. Garrett says he doesn’t want to lie anymore.

Frank goes into Erin’s office, she tells him that she is not giving him another warrant. Frank says he doesn’t want another one, he just wants the judge to broaden the one he already has. Erin tells him to get out before she starts screaming.

Frank visits Garrett in his office, Garrett says he lost weight, stopped drinking, he grew, he changed. He tells Frank that consistency is his north star, he wears the same suit, eats the same lunch, every day. Frank tells Garrett that he needs to think of him as a put bull, someone he can sick on whomever he wants. He is a bright talent and a good friend, but he is not going to be able to reinvent what he does there, it is not going to change.

At Sunday dinner, there is tension at the table. Erin vs Danny, Eddie vs Jamie, and Henry ask if someone can clue him in. Frank tells Henry what happened between Erin and Danny, they take a vote of whose side to take and most of them take Erin’s side.

At the station, Baez and Frank at there, he brought her a plate from Sunday dinner. He asks her if she remembers Sandy, the one who said Billy talked about St. Louis. Danny shows her the video again of Lubin when he had his protest, in the background we see Billy with his arm around Sandy, yet she said they weren’t close.

Baez and Danny go see Sandy, she reads them their rights. She says she is relieved, Billy didn’t deserve her, the bad one inside of her. They arrest Sandy and take her away.

Erin and Anthony are in the car, it is dark outside. They see the man he met at the bar, Lenny, and his brother, Jerrie. Anthony goes into the bar and confronts Jerrie. He shows him a photo of Lenny and his wife and children, and calls Jerrie scum, and walks out.

Frank drops by to see Garrett who gives him a sealed envelope. Frank won’t take it, he says he doesn’t take sealed envelopes from him, they talk. He tells Garrett that there is nobody with who he would rather ride shotgun than him. The letter wasn’t a resignation letter, it was Frank walking back his comments.