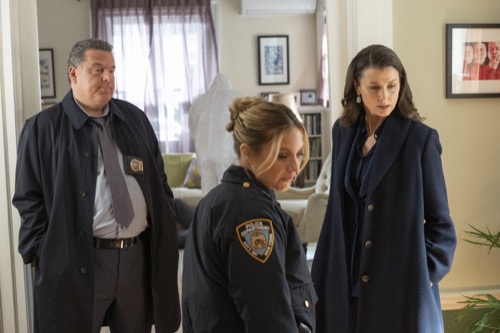 Tonight on CBS their hit drama starring Tom Selleck Blue Bloods airs an all-new Friday, May 14, 2021, episode and we have your Blue Bloods recap below. On tonight’s Blue Bloods Season 11 Episode 15 “The End,” as per the CBS synopsis, “Danny discovers his nephew has been working undercover within a gunrunning organization and his cover may be blown..”

The episode begins with a man walking into a house and shooting everyone inside, except for a young woman that hides in a closet and doesn’t say a word – when she thinks the shooter is gone, she calls 911 and says help me. Baez and Danny are on the scene of a dead man, Charles Wright, 28 years old – they think he was pushed out of a car.

His cell phone is in his pocket, Danny picks it up and the last text says he was going to go make a gun buy and the address is there. He tells Baez to get a warrant and he is going to put the pedal to the metal. They show up and see two guys with guns just outside. Inside, Joe Hill is there and it looks like he is undercover. Joe manages to push Danny and run.

Janko is on the scene of the family massacre, Anthony arrives with Erin. Mom, dad, the son – Robert Watkins left a message for the police, the name “Max” written in blood. The daughter, Sara, is 18 and the only survivor. She was too traumatized to answer any questions.

Janko introduces Felix Evans from ATF to Erin. Erin asks what ATF is there, he says they are investigating a gun operation down in Georgia with some murders, he is pretty certain it is the same shooter. Anthony asks based on what, Evans says family massacre. And, the son who was killed, is believed to a part of their operation. If the current pattern holds, this won’t be the last time they hear about Max.

Frank is with Danny who says he was in a stash house working a homicide when he recognizes one of three perps, Joe Hill, working undercover. Frank says yes but he had no idea he was working in Manhattan, Jamie has been working as his handler. Danny says he and his partner could have killed his nephew, his grandson had the takedown gone bad. Danny is upset, he leaves.

Joe calls Jamie, he tells him it has been a couple of crazy days. Jamie asks him if he wants to call it off, Joe says no, the boss wants to meet with him, he thinks he may have been made – Joe has to hang up before telling Jamie where the meeting is.

Danny and Baez are speaking to Langley, the guy at the takedown who had thirty-five guns, he says he will talk to the DA for a deal.

Sara is with Anthony and Erin, she says Robert was working with someone named Max and she is sure he was into something bad. Robert told her that he wanted to get away from Max and that he was in trouble.

Frank gets a visit from Rachel Webber, ATF who tells him that she didn’t know Hill was going in the city. She says he came to the city on his own without prior consent. Frank says he could have been shot today by his own people. She asks him if he micromanages every undercover, or is Hill special. She tells him to trust her, it is an ATF operation. He asks her if she has eyes and ears on him at this moment, she tells him to stay out of it, then she leaves.

Baez traces the guns, it looks like they were bought in Georgia legally and sold for five times the price in NY.

Jamie meets with Danny, he says he is worried about Joe, he told him that he is under suspicion since the takedown. Danny says he was working a homicide and according to the guy’s phone, he was on the way to a gun buy. He had no idea that Joe was going to be the seller.

Erin meets with Langley, if he tells her who killed Charles Wright, she will speak to him about a deal. He doesn’t know who killed him, but he thinks he knows why, he was skimming. And the guy who takes care of the hits is Max Fagan. Erin asks if he knows Robert Watkins, Langley says he heard that Max was going to take care of him too.

Cook asks Jamie what kind of car he drives, he says ’71 Chevelle, and Joe says the same thing. Jamie saved Joe’s life, Cook lowers the gun and hangs up on Jamie. Cook says he is down two guys and a big shipment is coming in on Wednesday, if he finds out it was one of them that tipped the cops, they are going to end up like the Watkins family. Joe asks the location of the shipment, Cook says no, not yet. But, they are going to be working with Max from now on.

At the station, they look up Max Fagan, he has a long rap sheet but they don’t have probable cause for an arrest this time. Danny says these cases are connected, Erin tells him to work with Anthony.

Sid and Jamie are in Frank’s office, he wants to pull Joe, but Jamie says he can’t because he doesn’t know where he is, he is laying low.

Danny and Anthony drop by Max’s apartment building, they say they are investigating some robberies and were wondering if he saw anything. He says no, but he will keep his eye out and call them if he sees anything suspicious.

Danny and Anthony tell Erin that Max’s girlfriend, Charlotte, confirms his alibi. Just then, Evans walks in, he says he thinks Max is involved in at least five murders in Georgia. Ballistics confirmed the murders are tied together, but not tied to Max. Danny says if Max has a dog, then maybe some dog hair could be found at the Watkins’ house. Anthony and Danny go through the garbage at Max’s apartment and find one with a vacuum bag with dog hair in it.

At Sunday dinner, Danny tells the family that Joe is working undercover and Jamie knew about it the whole time. Jamie says for six months, Sean tells him that he lied to them, he said he was taking some time off. Eddie can’t believe that Jamie didn’t tell him. Danny is upset, he could have killed Joe.

Erin asks Jamie how he could have let Joe do this, Frank says he is a grown man and can decide what he wants to do and basically it is nobody’s business. Frank leaves the table, Henry follows and tells him the family is scared for Joe, they will come around. Frank admits that he is afraid as well.

Anthony tells Erin that the dog hair was a match, so unless the dog did the murders, they got him. Erin says it is circumstantial, Evans agrees with her but Erin gives permission to arrest Max.

Webber is back in Frank’s office, she is upset that Joe was only communicating with Jamie. She says if something happens to Joe it is going to be on him.

Danny drops by Max’s apartment and finds out from the building manager that he is gone and took suitcases with him, looked like he was in a hurry.

Jamie goes undercover and finds Joe, he tells him they put a new GPS tracker under his car and if he doesn’t feel safe, pull out. He also tells him that Frank wanted to pull him off the case. Jamie then goes to see Danny update him about Joe.

Anthony tells Erin that he has never seen her allow an arrest without probable cause. She says Joe Hill, she is worried about him. Anthony gets a call from Sara, the guys who were protecting her are gone. Anthony says he will be right there, he and Erin run out.

Joe gets a chance to call Frank, he tells him he is ok and he loves him.

Anthony and Erin arrive to check on Sara, she is shot and killed. She calls Danny and tells him and she lets him know that two bullets were left on the counter, Max is sending a message. Anthony tells Erin that Evans retired months ago.

Max meets with Joe and his partner, he tells them to get out, they are going in his car. Max starts speeding and driving recklessly.

Sid goes in to speak to Frank, Erin is with him, he tells him that they lost eyes on Joe.

Danny, Jamie, and Baez show up at a vehicle that they believe Joe was in, it explodes and they see there is a body inside and on the car, which is the charm that Frank gave Joe.