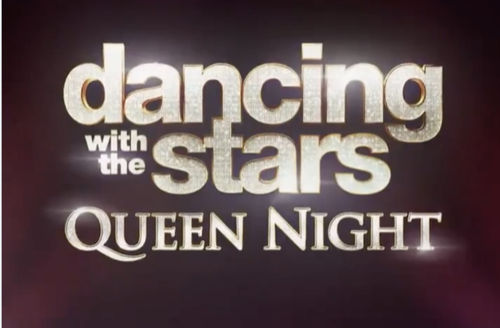 This week, the show features an opening number to “I Want It All” by Queen, complete with a Tyra walkout. Celebrity and pro duos then perform time-honored solo dances including the Foxtrot, Quickstep, Paso Doble, Jive and more, in addition to Relay Dances. For the Relay Dances, couples in each relay group compete for extra bonus points from the judges, given to the couple(s) whom they feel perform the best within each relay.”

Tonight DWTS’ episode begins with Tyra welcoming everyone to Queen night and for the first time this season, the couples will have to dance two dances.

Judges Comments: Len: “Lifts are not allowed in this dance and you snuck one in and Amanda, you were lifting your feet too much. I wanted to see more, showing me something special and I didn’t see it.” Derek: “The opening was so beautiful and elegant, I slightly agree with Len. It wasn’t bad but it wasn’t your best.” Bruno: “I have no idea what they are saying, I thought it was so good, there was just a slight mistake and it was absolutely brilliant.” Carrie Ann: “Everything you do is incredible, this was high energy. If you want to win you have to surprise us, you have to push past comfortable.”

Judges Comments: Derek: “You are just so genuine when you perform, is infectious to watch, there was so much footwork in there. You didn’t miss a step, that was a challenging routine and you were on point.” Bruno: “Not a spec of fat out there, you were a lean, mean, quick-step queen.” Carrie Ann: “You are so light on your feet but you use the floor. You have an incredible way of putting grace in a rock routine.” Len: “It went straight into the dance, speed and control. I would have liked more body contact, overall you are always a joy to watch.”

Judges Comments: Bruno: “This basketball legend is now an accomplished dancer. This was a tricky dance, you put your own style without going to far. You have to extend your chest and lean back from your hips. The frame was there but you need the eagle.” Carrie Ann: “When I watch you there is a spiritual thing going on. You bring DWTS in a new era, the way you perform with ease and naturalness.” Len: “It had attack and it had attitude. I like that you lighten and brighten the dance floor. Last week you had a dance that suited you so much. This week you had a dance that didn’t suit you.” Derek: “I agree a little bit, it lacked the power and posture of a paso.”

Judges Comments: Carrie Ann: “You have been working so hard on your lines. Now I see full on beautiful lines, well done.” Len: “It is not how you start, it is how you finish and you are finishing strong.” Derek: “The Viennese Waltz lends itself to be smooth, this wasn’t that, it had power and energy. I loved your black sequined suit as well, I loved it.” Bruno: “Now you really have become a true leading man. You were leading this dance, you were so on it, brilliant.”

Judges Comments: Len: “Your frame was good, I liked your hold you had there. Your head became too fixed, it was scary. You have to make it more natural.” Derek: “Don’t do your heard artificially, the head comes from the shaping of the body, the head should be inline with the spine. Your feet and knees were impressive.” Bruno: “I blame the muscles, you were a bit tight in the beginning. You relaxed in the second half. It has to be a little more fluid.” Carrie Ann: “There is a little bit of tension, relax how you are now. You know the dance, have fun, let it go.”

Judges Comments: Derek: “That was so avant guard experimental, I absolutely loved it. I don’t know what the ponytail thing is, but I loved it, well done.” Bruno: “That was like watching super models, slinky, sexy, cool, excellent.” Carrie Ann: “In this competition you need to grow, we don’t want you to do what you came in here doing, that would not be fair. You are growing, I loved it, amazing.” Len: “You showed lovely fast aggressive movements. But I didn’t see some slow deliberate walks across the floor. But as always, you dance beautifully.

Judges Comments: Bruno: “In spite of not feeling well, you rocked that Paso Doble It was sharp, a little slip, the performance was very good.” Carrie Ann: “You are already a champion you don’t know how many people you inspire. Do not be not confident. You had a little slip, but I am proud of you getting out there an dancing tonight.” Len: “She was a little bit hesitant, but I totally understand. I thought she did a sterling job.” Derek: “Super proud of you, you are a champion, tonight wasn’t the best night, but we love you.”

Judges Comments: Carrie Ann: “Tonight I saw true joy in your dancing. You were open, free and relaxed. It was so, it made me happy, well done.” Len: “Your bum stuck out a little bit here and there, you could have tucked that in, but overall, not your worse dance, but not your best.” Derek: “I disagree, I think that was your best energy, it was refreshing. Your frame was wider, it was more consistent, smoother. Well done.” Bruno: “It was a fox trot glowing with affection. I actually saw your true self tonight, you were honest, spontaneous and you moved very well. Well done.”

Judges Comments: Len “It had sophistication, elegance and style. The parts in hold, great technique, I thought it was an all around polished performance, well done.” Derek: “It was smooth, the costume, the concept, it was all there. You were just radiant tonight, regal, stunning, fantastic. All hail queen Melora tonight.”

Time for Results. The couples in the bottom two are Jojo Siwa and Jenna Johnson, The Miz and Witney Carson.

Eliminated: The Miz and Witney Carson