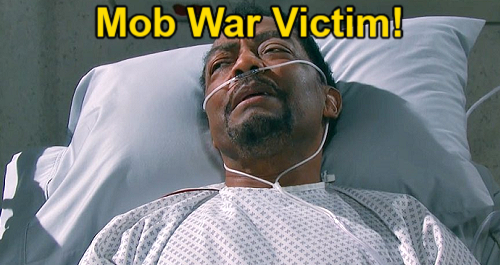 Days of Our Lives (DOOL) spoilers tease that Jake DiMera (Brandon Barash) and Carmine’s (Richard Stevens) showdown will end in disaster when Abe Carver (James Reynolds) becomes a victim of this mob war. Abe will land in the wrong place at the wrong time, but Jake will do his best to help after a shocker strikes.

DOOL fans know Jake has a problem on his hands since his old associate blames him for a murder he didn’t commit.

Carmine was the one who beat Jed Zanetti to death before Jake could stop him, but now he’s trying to pin the whole thing on Jake.

Of course, Jake doesn’t want to land behind bars, but he doesn’t want Gabi to give up Gabi Chic either. His solution will be to threaten Carmine with a gun, but this fierce faceoff will go awry.

During the week of October 18-22, Richard Stevens will make his Days debut as Carmine according to SOD.

Carmine will somehow make trouble for Abe, who’ll apparently stumble across Jake and Carmine’s confrontation in a wooded area.

Abe will end up collapsing to the ground at one point, but it could be a heart attack situation rather than a gunshot wound.

So far, we’re not seeing signs of anything too bloody happening, but we’ll see how things play out.

Regardless, Jake will turn his attention to getting Abe the help he desperately needs – and that could give Carmine a chance to bolt unless Jake strikes him down.

Days spoilers say Jake will be in panic mode as he kneels beside Abe, but he’ll offer reassurance anyway and get Abe to the hospital ASAP.

Abe’s loved ones will worry about him after he gets caught up in this mob battle, but Jake will face some drama of his own since his arrest is imminent.