Days of Our Lives Spoilers: Chad Questions Rolf About Gwen – Realizes Truce With Rolf Was A Ruse? 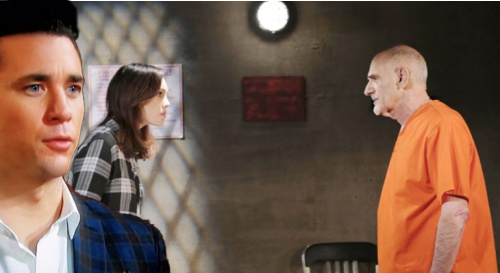 Days of Our Lives (DOOL) spoilers tease that Chad DiMera (Billy Flynn) will decide that it’s time to get some answers about Gwen Rizczech (Emily O’Brien). As DOOL viewers know, Gwen has recently threatened to tell Abigail DiMera (Marci Miller) about how she and Chad slept together on New Year’s Eve.

Gwen told Chad that if he couldn’t convince Abigail to let her stay at the mansion, she’d sing about their affair.

Well, during the week of January 11-15, Gwen will end up gleefully telling Abigail that she slept with Chad, so the cat will be out of the bag. But since it will be a while before Gwen’s true motivations are revealed, it looks like the Deveraux family will be wondering about what Gwen’s deal is and why she has it out for them.

Chad will end up going to a familiar face for help in his quest to get information on Gwen’s past and possible motives in harming Abigail and her family. Days of Our Lives spoilers say Chad will have some reason to suspect that Wilhelm Rolf (William Utay) may know something about Gwen.

Actually, if Chad gives the matter careful thought, he’ll remember that Rolf mysteriously escaped from the mansion on the night of the blackout when Gwen was “watching” him. In actuality, Gwen untied Rolf and allowed him to escape, and perhaps now Chad will find himself suspicious of what occurred that night.

At any rate, Days of Our Lives spoilers say that Chad will head to Statesville Prison where he’ll grill Rolf about Gwen. Who knows – Chad might even find out that Gwen has been to visit with Rolf at the prison, so he might confront Rolf about that.

But chances are, Rolf’s not going to give anything up to Chad, since he fully supports Gwen’s mission and promised her that he’d keep his mouth shut about her plan.

We’ll see what transpires between Chad and Rolf, but we doubt that Rolf will say or do anything but pretend like the truce between himself and Chad is still in place.

But will Chad buy Rolf’s continuing “Mr. Nice Guy” act? Something tells us that Chad might get the drift that he’s being snowed, but there probably won’t be much he can do about it.

Do you think that Chad will realize that Rolf knows more than he’s letting on about Gwen’s evil schemes? Stick with us here at CDL, and we’ll keep you continually up to speed on the latest Days of Our Lives spoilers and news. We’ve got you covered on all the soaps!