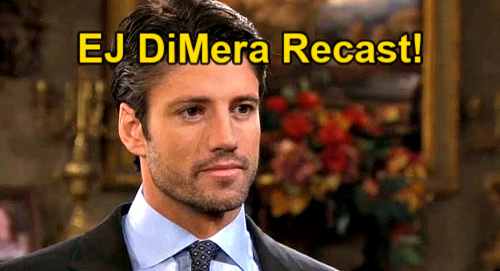 Days of Our Lives (DOOL) spoilers reveal that fans have been asking for an EJ DiMera recast for what feels like forever, but it’s finally happening! On a podcast called Mission: Impodible, Thaao Penghlis (Tony DiMera) came on for an interview and was asked if he had anything to plug. That led to Penghlis confirming some HUGE news that affects the DiMera family’s future.

“Well, I go back to Days on the eighth,” Penghlis said. “That’s going to be interesting because I know they’re bringing a recast of EJ, so I have a feeling that I’m going to be doing work with the brother of old.”

Jason 47 shared some updates on his Facebook page later after speaking with the podcaster. It turns out this interview was recorded before March 8, so that was the date Penghlis was referring to.

That means Penghlis has already been back on the Days of Our Lives set and has been filming some upcoming scenes as Tony DiMera.

Penghlis didn’t spill the identity of who’ll be playing EJ, so that confirmation will have to come another day! However, it’s good to know an EJ DiMera recast is indeed coming.

Since James Scott has no interest in reprising the role, it’s a great idea for DOOL to bring another actor in and give this character a fresh start in Salem.

Of course, it might take some getting used for fans of Scott’s portrayal, but the best thing we can do is give this recast a real shot at proving himself. EJ is a fantastic character who certainly deserves to be around.

There’ll be tons of drama potential once EJ’s back in the picture, so we’ll look forward to all the chaos the show has in store.

Days of Our Lives spoilers say EJ will reunite with his family, which means meeting his brother, Jake DiMera (Brandon Barash), for the first time. Something tells us EJ and Jake may not get along all that well, especially since EJ will likely be looking to reclaim the DiMera throne.

It looks like Sami Brady DiMera (Alison Sweeney) is also about to get a bit too close for comfort when it comes to her ex, Lucas Horton (Bryan Dattilo). That could set the stage for some trouble once EJ returns to Salem as well, so Days of Our Lives spoilers are hinting at some fun stuff.

DOOL fans will definitely see some shockers and shakeups once EJ’s back in the action. CDL will have all the hot Days of Our Lives spoilers, updates and news you’re looking for, so stick with us!