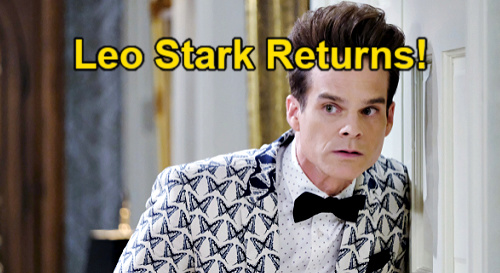 Days of Our Lives spoilers reveal that there are a lot of huge names attached to Beyond Salem. Casting details confirm Greg Rikkart, who plays Kevin Fisher on The Young and the Restless (Y&R), is reprising the role of Leo Stark in the Peacock spinoff. Other characters that have signed on for the limited streaming series include Carrie Brady (Christie Clark), Austin Reed (Austin Peck), Andre DiMera (Thaao Penghlis) and more.

DOOL spoilers reveal that Leo was quite the character when he was first introduced on the NBC soap. As time went on, Leo’s crazy antics became more extreme. Fans didn’t like what Leo was doing to “Wilson.” At the same time, there were some downright outrageous scenes that provided amusement.

Leo sent dirty text messages to himself – to incriminate Sonny Kiriakis (then played by Freddie Smith), of course. He blackmailed Sonny into marrying him, which set up some pretty intense scenes in the bedroom.

Then, Gabi Hernandez (Camila Banus) tied Leo to the bed so Sonny and Will Horton (Chandler Massey) could enjoy some private time. So, whenever Leo is involved, expect a wild ride

Leo’s storylines revolved around Will and Sonny in the NBC soap. However, it’s not clear if Beyond Salem is going to put Rikaart with Will and the new Sonny Kiriakis (Zach Tinker) or pair him with other characters. As we get closer to the spinoff’s premiere, more details will be released.

Days of Our Lives spoilers reveal that a lot of fan-favorite characters — dead or alive — are going to be part of the spinoff. Andre DiMera (Thaao Penghlis) is resurrected for the limited series. Anna DiMera (Leann Hunley) will be seen as well as Austin and Carrie.

Lisa Rinna will be coming back as Billie Reed. It was also confirmed that Eileen Davidson is excited to join the project. However, it is not known if she will play her original DOOL characters, Kristen DiMera and Susan Banks.

The actress could be given a brand new role and is “beyond excited” about the opportunity. As many fans know, Rinna and Davidson don’t just have DOOL in common. They have also been part of the “Real Housewives” franchise.

Let us know what you think of the star-studded cast of Beyond Salem. Do all the big names joining the spinoff make you interested in seeing what it’s all about? A release date has not yet been confirmed