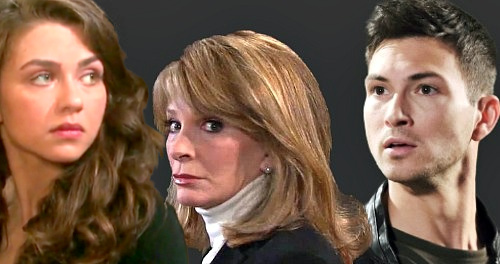 Ben hoped that maybe Claire Brady (Isabel Durant) could help unlock something, but Claire found herself in the same loathed boat.

Jake DiMera (Brandon Barash) will suggest Dr. Wilhelm Rolf’s (William Utay) memory serum as an option during the week of March 15-19. Although Ben may be intrigued and tempted, he’ll end up nixing that possibility for now.

There are too many risks associated with that serum that just aren’t worth taking.

Next, Days of Our Lives spoilers state that Ben will move to another tactic as he convinces Ciara to let him talk to her. Ciara will remain wary, but she might get reassurance from Kayla Brady (Mary Beth Evans) or someone else that help will be nearby.

Days spoilers say Ben will walk Ciara through each step they took on the path to love. He’ll hit all the important details and milestones, but Ciara just won’t remember or feel anything for her husband.

Ben will hope he can spark something, but this plan will result in failure – at least for the time being.

From there, Ben will move to another strategy that’s proven effective for several Salemites around town. Days of Our Lives spoilers say Ben will pay Marlena Evans (Deidre Hall) a visit and apparently request a hypnosis session.

Ben will feel like Marlena’s just the person to restore Ciara’s missing memories, so it sounds like he’ll beg Marlena to put Ciara under and see what happens. With Marlena’s help, Ben will want to unblock Ciara’s memories since the 2018 motorcycle crash.

It might be the only way for Ciara to feel the way she’s supposed to feel about Ben again.

Days of Our Lives spoilers say Marlena will listen to Ben’s heartfelt plea and decide how she’s going to handle it. Since Ciara would be the one hypnotized, she’s obviously someone Marlena will want to consult with.

Marlena might agree to help Ben, but only if Ciara gets on board with this hypnosis idea.

There’s no guarantee this strategy will work either, but Ben will at least hope Ciara’s willing to try! Will Ciara indeed give hypnosis a shot? We’ll pass along updates as other DOOL news emerges.

Days spoilers hint that Ciara will have to make a big decision and figure out what’s ahead, so stay tuned. CDL will have tons of other sizzling Days of Our Lives spoilers, news and updates, so be sure to check back regularly.