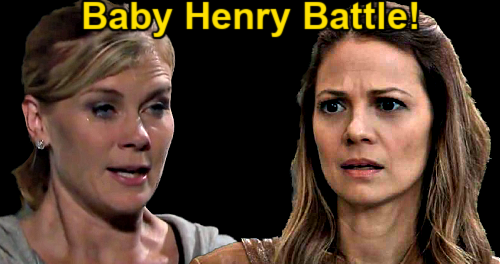 Days of Our Lives (DOOL) spoilers tease that Sami Brady DiMera (Alison Sweeney) will soon be back on canvas, and drama will surely follow. As viewers will remember, Sami and Allie Horton (Lindsay Arnold) recently had a touching conversation via video chat, during which Allie revealed to her mom that she was raped, and that Henry Horton (Jayna and Kinsley Fox) was the result.

Well, soon, Allie will undergo hypnosis with Marlena Evans (Deidre Hall), during which Days of Our Lives spoilers say that she’ll remember the terrible details of her assault, including exactly who assaulted her.

Charlie Dale (Mike C. Manning) will be clear in Allie’s memory as being her attacker, and some subsequent DNA tests should solidify what Allie will now know – that Charlie is Henry’s father.

It will be interesting to see exactly what happens with Charlie down the line. Even with Allie’s recall and the DNA results, the US authorities may decide that they can’t prosecute the case since the assault happened in another country. And whether Charlie will face justice in London remains to be seen.

But Allie will have another situation on her hands, in addition to the issue of whether Charlie will be punished for his crime. There will be the issue of Henry and his parentage…and his extended family.

If Charlie walks on the assault, then he could really make Allie’s life a living hell by wanting to see Henry. And even if Charlie doesn’t express interest in Henry, Ava Vitali (Tamara Braun) just might.

Even though Ava hasn’t ever really taken to Charlie, she might decide that she wants to have a relationship with her grandson Henry.

That’s going to put Allie in a terrible position, as she probably won’t want the woman who held her at gunpoint being anywhere near Henry. And for sure, Sami isn’t going to want Ava anywhere close to Henry.

But could Ava have some legal rights to Henry? Ava could press the issue, which would probably pit her directly against hurricane Sami.

We could see Ava and Sami go head-to-head over the issue of Henry, with Sami strongly putting her foot down and saying that there’s no way Ava’s going to have a relationship with Henry under any circumstance.

This situation could certainly get messy, and some Ava/Sami drama would be sure to shake things up on the show. Do you think that Ava will battle Sami for some time with her grandson Henry?

Stick with the NBC soap and we’ll be sure to keep you up to speed on all the latest Days of Our Lives spoilers and news. Check out our daily DOOL episode recaps, too!