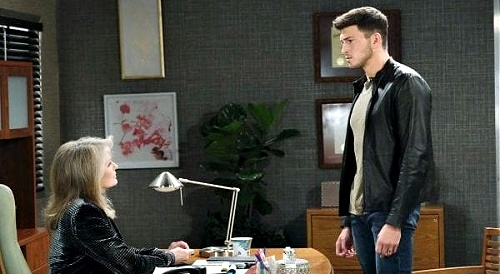 Days of Our Lives (DOOL) spoilers recap for Wednesday, December 6, reveal that Nicole Brady (Arianne Zucker) disconnected from a call with Eric Brady (Greg Vaughan) as Rafe Hernandez (Galen Gering) knocked at the door of her apartment.

Nicole expressed frustration about Eric being gone, saying that she missed him and worried that she’d never see him again. Talk soon turned to Ava Vitali’s (Tamara Braun) disappearance, and Rafe explained that he didn’t have any solid leads – it was like Ava had just vanished into thin air.

In the park, Allie demanded to know who Tripp Dalton (Lucas Adams) had been on the phone with he mentioned that someone else might have raped her. Tripp tried to leave, saying that he was just trying to get to the truth, but Allie insisted on knowing what was going on.

Tripp told Allie that someone who shared his DNA might have been the actual rapist, and Allie thought that sounded ridiculous. Tripp asked Allie to think back and remember if she actually saw that he was the one who held her down.

Allie went silent and thought intently. Tripp apologized to Allie and left, saying that he wouldn’t bother her anymore.

In Philadelphia, John told Steve that he thought he knew where the “Charlie” that Angelo mentioned was – in Salem. John explained that a Charlie Dale (Mike C. Manning) had been seeing Claire Brady (Isabel Durant) and that he sounded just like who Angelo described.

John said that Claire’s Charlie also grew up in Philadelphia and was raised by his father.

Steve said that they needed to get back to Salem asap. John immediately tried to call Claire. “I don’t want Charlie anywhere near Claire!” John said. Meanwhile, at the Brady house, Charlie and Claire had the place all to themselves and talked about making love.

Charlie and Claire talked about Claire’s past a bit, and Claire opened up about how she used to be jealous of Ciara Weston (Victoria Konefal).

Claire lamented about how Ben Weston (Robert Scott Wilson) and Ciara were soulmates, and Charlie floated the idea that perhaps they were working on becoming soulmates, too.

Claire’s phone rang and it was John trying to call, but Claire ignored the call, as she wanted to keep talking about being soulmates with Charlie.

Claire opened up again and said that she was a little afraid, because this is when things usually start going wrong in her relationships. Charlie said something cryptic about having dark impulses, and Claire wondered what he meant, but he didn’t elaborate.

Claire noted that it was ok for Charlie to open up about things from his past, and that she wouldn’t judge him.

Over at the hospital, Ben entered Marlena Evans’ (Deidre Hall) office wanting to talk about his deep feelings of grief for Ciara. Marlena suggested that Ben talk to Claire, since she was grieving, too.

Just then, John called Marlena from Philadelphia and told her that Tripp’s half-brother might be Claire’s Charlie. Marlena got alarmed and Ben noticed.

Marlena then tried to call Claire but got no answer, and she asked Ben if he had met Claire’s new boyfriend Charlie. Ben said that he had met Charlie once, but that Charlie didn’t seem to want him to stick around.

“It was like he wanted Claire all to himself,” Ben said, unnerving Marlena. Ben and Marlena headed over to the Brady house together.

Back at Nicole’s apartment, Rafe took a call from John, who explained to Rafe about Charlie off-screen. Rafe quickly headed out of the apartment to head over to Charlie’s place.

Soon, Allie returned to the apartment to join Nicole. Allie relayed that she bumped into Tripp, and Nicole told Allie that John had called Rafe and that Rafe took off in a hurry.

Back at the Brady house, Charlie and Claire happily concluded their talk. Claire said that she was glad they talked, and that she felt closer to Charlie. Charlie said that he thought they had done enough talking, and he and Claire headed upstairs to Claire’s room together.

At Charlie’s apartment, Ava hallucinated from the drugs Charlie had given her. Ava imagined that Tripp found her tied up in the apartment, but that Charlie came in and stabbed Tripp to death.

Then, Ava imagined that Steve hit Charlie over the head, but it was too late for Tripp, and Steve blamed Ava for Tripp’s death. Ava next imagined that Charlie was about to kill her, too.

A while later, Rafe knocked on the door to the apartment looking for Charlie. When Rafe heard a thud coming from the apartment, he entered and found Ava unconscious on the floor, still tied in her chair. Rafe called out to Ava and checked for a pulse.

That was a terrific episode of Days of Our Lives, and there’s plenty more coming tomorrow, so stay tuned! Stick with the NBC soap and don’t forget to check CDL frequently for the latest Days of Our Lives spoilers, news, and daily episode recaps.