Doubling Down With the Derricos Recap 06/22/21: Season 2 Episode 4 “California Bound” 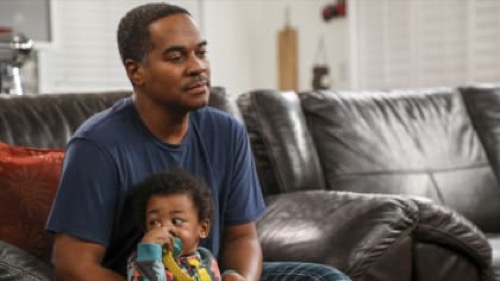 In tonight’s DDWTD episode, after GG addressed her challenges with her son, Deon started asking less of her. He didn’t want to tire his mom or take time away from her with her grandkids. He just knows that now is not easy for her. GG was getting up there in age and she didn’t have the energy to be running after babies. It’s why she asked her son when is his limit? When is he going to stop having kids? Deon and Karen are pregnant again.

They were too early in their pregnancy to get a scan because the first scan couldn’t find the baby and so they have to go back to the doctors for the scan and they also have to follow up with a specialist about their son Diez. Diez has an elongated head. It had the potential of affecting his health and even his mental capacity.

His parents have to take him to a specialist in California to see if they could potentially reverse or fix the issues with his head. Before they do that, they discussed hiring a nanny. They needed the extra help and again they didn’t want to put GG in the tough position of choosing her health or her grandbabies.

They’ve talked about hiring a nanny in the past. It came to nothing and they were taking it seriously now because again of their conversation with GG. Deon thought they should hire one. He put it to Karen and she seemed to be excited about it but then the worst happened. She went to the doctor and they didn’t find a heartbeat. They confirmed she had a miscarriage. Karen was dealing with the loss of her baby on top of everything.

Karen was also dealing with the loss of her grandmother who recently died. She was scared about her Diez and whether or not he needed surgery and she and Deon both needed time to grieve. They loved the new child the moment they found out they were pregnant. They put all that love and excitement towards the new child and now the baby is gone. They each needed time to grieve and they checked upon each other to make sure the other was okay.

They didn’t say anything to GG right away. Her reaction to the pregnancy was so very poor that it made her son hesitate. He still loves her and he knows she will be sad for them but they decided to wait on telling her until Karen returns from California with Diez. And hopefully with some good news.

Karen was traveling to California in one of the cars with Diez and his twin brother. Her best friend Washeka was going with her while Deon stayed behind to be with the rest of the kids. There was some talk about the road trip. Deon is very OCD and he knows that a lot of rest stops have been closed due to Covid-19 and so he dreaded the boys have to defecate in bags.

Karen got scented bags and she thought they’ll help only Deon didn’t want the bags of poop to be in the car. He tried to convince Karen to have it hanging outside of a rolled-up window. She shot that down because she didn’t want the poop banging on the window. Before she left, Karen spoke with her eldest and she told her that she had a miscarriage. Her daughter then said that the baby is with Carter.

Carter was also someone they lost. It was very sweet of the daughter to say the new baby was in good company and that cheered up Karen some. Karen went on a road trip with her boys and her friend. They stopped at the beach to give Diez one last fun day. The next day he would be seeing a team of doctors and that had everyone worrying.

None of the other children have ever required a team of doctors. It had Deon and Karen both concerned that what’s going on with their son was worst than initially believed. It wasn’t until Karen spoke with the team of doctors that she finally got answers. Or to better put it, she was finally put at ease. Her son does require surgery and he will be in the ICU for two days and in the hospital for five days.

Karen had Deon on the phone the whole time she spoke with the team of doctors. This is great because there’s no way she would have been able to retain all that information and so Deon got his questions answered as well. Deon had wanted to do something nice before Karen came back. He looked into nannies and he reached out to one who had been suggested to him by a friend. Deon had wanted to hire her right away but the thought of his wife is what stopped him.

Karen has in her mind an idea of the nanny. She’s not going to want to swerve from this ideal and so Deon couldn’t hire anyone in her absence. He needed to run the important decisions past her as she does with him. Karen was later notified that Diez’s surgery might be more drastic than they first thought. And with this new surgery, came risks.

Diez could lose his hearing or even his sight. His parents were both scared and so it’s a good thing they were surrounded by their kids. Deon played a guessing game with the kids back at the house.

He was guessing their feet when his mother tried to trick him by putting her feet in and so that made Deon laugh. He hasn’t had a reason to laugh in a while and so laughing was good for him. It was good for the soul. Deon and Karen both still anxious about their son Diez because someone will be cutting into Diez’s skull. Deon waited until the kids were in bed when he just broke down in tears. And his mother comforted him.