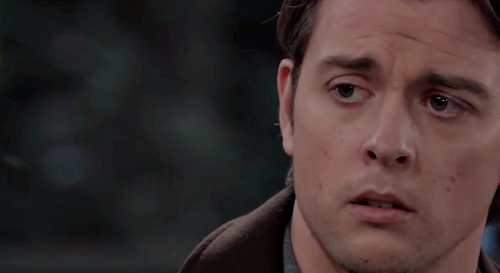 General Hospital (GH) spoilers tease that Michael Corinthos (Chad Duell) stands to be the big loser in love if things continue on their current course. As GH viewers know, Michael and Willow Corinthos (Katelyn MacMullen) got closer a while back, but that closeness took a big hit when they finally learned the truth – that Harrison Chase (Josh Swickard) and Sasha Gilmore (Sofia Mattsson) didn’t actually sleep together.

Now Michael, Willow, Chase, and Sasha are trying to figure out where they all go from here. Willow and Chase have had dinner together and ended up kissing after Chase blurted out that he still loved Willow and always would.

It’s looking like Willow and Chase just might reunite, which would potentially leave Michael to try to get back together with Sasha.

The only problem with that is that Sasha has recently forged a sort-of friendship with Brando Corbin (Johnny Wactor). Sasha and Brando don’t always get along, but GH viewers can tell that there’s definitely an attraction there.

Sasha even kissed Brando on the cheek recently after they shared hot chocolate in the park, and they seem to keep crossing paths, thanks in part to Cyrus Renault (Jeff Kober).

And even though Sasha was there for Michael after it was revealed that Sonny Corinthos (Maurice Benard) died, she’s still being pulled pretty strongly into Brando’s orbit on a regular basis.

Something tells us that there’s a strong attraction between Sasha and Brando, and we could see the two of them get closer as the days go by.

If that happens, then Michael could really get left out in the cold where his love life is concerned. If Willow and Chase reunite for good, then that would mean that Michael would be forced into the “coparent zone” with Willow.

And if Brando and Sasha get closer and form a couple, then Michael could be totally out of luck from a romantic standpoint.

Do you think that Michael is going to wind up the big loser in the equation with Willow, Chase, Sasha, and Brando? Stay tuned to the ABC soap and we’ll keep you up to speed on the latest General Hospital spoilers, daily episode recaps, and news.