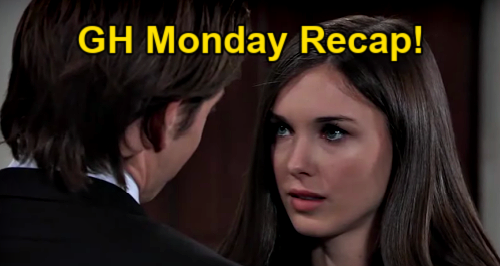 General Hospital (GH) spoilers recap for Monday, February 15, reveal that Lenny Caulfield (Rif Hutton) and Sonny Corinthos (Maurice Benard) talked at the Tan-O Bar. Phyllis Caulfield (Joyce Guy) called the bar to see how things were going, as she was out of town in Port Charles to see Nina Reeves (Cynthia Watros).

Soon, Officer Ralph Finchley (Tatum Shank) walked into the bar and shared with Lenny that there have been some robberies around town and that “Mike” could be responsible. Officer Finchley quizzed Sonny about where he was last night when someone robbed Harper’s Hardware.

“Bring me in or get off my case,” Sonny said, mouthing off to the officer. Sonny walked away from Officer Finchley and Lenny, and the officer told Lenny that he should have run Mike’s prints when he had him at the station the first time.

A short time later, Officer Finchley swiped the mug that Sonny was drinking from to test it for prints.

When Alexis came back downstairs, she overheard her girls talking about how they haven’t been able to rely on her for months. It was time to head to the funeral, but Alexis claimed to leave her phone in the house, so she lingered behind long enough to sneak a drink out of a hidden mini bottle.

Just then, Molly returned to the house and caught her mother.

Josslyn said that she was worried about something happening to Jax or to Carly Corinthos (Laura Wright), and Jax explained that she needed to go on and live life to the fullest.

Upstairs, Carly was having trouble with her necklace when Jason Morgan (Steve Burton) walked in. Carly said that she didn’t think she could do this today, but Jason assured her that she could. Jason pointed out that Carly was dressed and ready to go, and that at her core she was someone who refused to quit.

Jason encouraged Carly to get through the next few hours, and then go from there. Jason and Carly went to the living room, where Jax and Josslyn were still talking.

Carly asked Jason to reassure Josslyn about all the security measures, but Josslyn said that Jason didn’t need to. Jason mentioned something to Josslyn about living life to the fullest, and Josslyn noted that her dad said something similar.

Over at the Q mansion, Olivia Quartermaine (Lisa LoCicero) and Dante Falconeri (Dominick Zamprogna) hugged and talked about Sonny’s death. Talk quickly turned to the syringe stabbing, and Olivia vowed to never forgive Alexis for that.

Near the foyer, Willow Tait (Katelyn MacMullen) saw Michael Corinthos (Chad Duell) holding two ties, and she advised him to wear the blue one, since it was Sonny’s favorite color.

Willow agreed with Michael that her moving into the gatehouse was a good solution for them, and Michael was happy.

Later, Michael and Dante toasted to Sonny in the living room, and after everyone agreed that Michael should wear the blue tie, Willow helped Michael straighten his tie. Willow and Michael took hands and walked out of the mansion together.

Over at Crimson, Phyllis talked with Nina. Nina showed Phyllis a picture of Nelle Benson Jerome (Chloe Lanier) as a young girl wearing the half-heart necklace, and she explained to Phyllis that the girl was now dead.

Nina asked if Phyllis could identify the man that she gave the baby to all those years ago, and she showed Phyllis a picture of Frank Benson. Phyllis immediately identified Frank.

Nina explained that Nelle had grown up to be a troubled woman who did terrible things, and she lamented that perhaps Nelle turned out that way because she didn’t have anyone who loved her.

Phyllis suggested that Nina call “that handsome man” of hers, but Nina explained that Jax had kept the secret of Nelle from her.

Phyllis didn’t think that Jax made his mistake out of malice, and together she and Nina concluded that once Jax realized that he was keeping Nina from her grandson, he probably would have told her the truth. “I love him,” Nina said. “Then don’t give up on him,” Phyllis urged.

At the church, Jax and Carly talked in the waiting room. Together, they worried about Josslyn and all her recent losses. Carly thought that perhaps Jax would say “I told you so” about Sonny, but Jax refused, saying that he wanted to help Carly through this.

In the church vestibule, Nina arrived looking for Jax. Some lady told Nina that Jax was in the waiting room, and Nina approached the door of the room. At just that moment, Jax and Carly’s conversation turned to Nelle.

Carly said that she wasn’t going to think about Nelle or what happened on that cliff because Nelle was dead, and that night could die with her. Nina was shocked to overhear this.

That was a terrific episode of General Hospital, and there’s plenty more action coming tomorrow, so stay tuned! Keep watching GH and we’ll always keep you current on the hot new General Hospital spoilers and news.