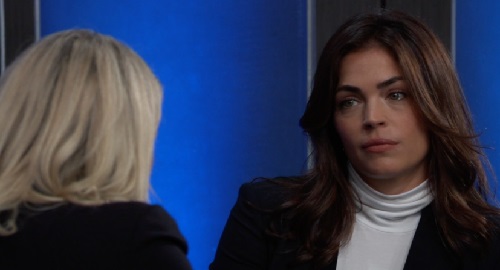 At Spring Ridge, Alexis Davis (Nancy Lee Grahn) will hear about Spencer Cassadine’s (Nicholas Chavez) stalker mayhem from Nikolas Cassadine (Marcus Coloma). When Nikolas reveals that he kicked Spencer out and cut him off financially, Alexis will surprise him by siding with Spencer.

Although Alexis obviously won’t condone what Spencer did, she’ll argue this is no time for Nikolas to turn his back on his son. Alexis will offer some reminders of all the horrible mistakes Nik’s made as well and push him to make amends while he still can.

As for Esme, she’ll smile on the phone as she suggests she can’t wait to get started. Esme has been hoping to score an internship or some type of volunteer work at Spring Ridge, so that may be what this call is about.

If Esme manages to get a paying gig, that’d be even better since she could use the funds right now. Regardless, Esme’s main goal is to be close to Ryan – and Esme is someone who’ll do just about anything to get what she wants.

Next, Spencer will offer another apology to Trina Robinson (Sydney Mikayla) and hope to keep her in his life. He clearly feels like Trina is a special young woman. “I knew that the moment I laid eyes on you,” Spencer insists in Monday’s preview video.

Trina will still seem uneasy since Spencer screwed up so badly, but she should keep her heart open for him – even if it’s just a crack. Meanwhile, Josslyn Jacks (Eden McCoy) will warn Cameron Webber (William Lipton) not to believe Esme’s latest act. Cam may feel like Esme’s speech was genuine, but Josslyn knows Esme’s only looking out for number one.

Over with Shawn Butler (Sean Blakemore), he’ll speak with Jasper “Jax” Jacks (Ingo Rademacher) about the Hayden Barnes (Rebecca Budig) investigation. Shawn will explain what he’s learned so far, but Jax will wonder how this circles back to him.

Maybe Shawn will hope Jax remembers something from when Hayden was in town that could help with the search for answers. It wouldn’t hurt to rehash Jax’s memories and work this angle one more time.

Nina Reeves (Cynthia Watros) will also catch up with Sasha Gilmore (Sofia Mattsson), who’s in no position to judge since she once posed as Nina’s fake daughter. Sasha won’t approve of Nina’s decision to keep Sonny’s survival under wraps, but she’ll get how secrets tend to spiral out of control.

Sasha will also talk about an idea she hopes Brando will agree to. As for Brando, he’ll reunite with Sonny now that he’s back from the dead and stir up some questions with Sasha’s suggestion.

“Is Sasha pressuring you to leave?” Sonny asks in Monday’s preview clip. Sasha might want to depart Port Charles with Brando and get away from any lingering mob drama, but we’ll see how it all plays out.

In the meantime, Britt and Carly will go for that “radical honesty” that Carly suggested. Carly may admit that her desire to protect her family trumped Britt’s feelings when it came to marrying Jason Morgan (Steve Burton). Although Carly may not apologize for doing what she had to do, she’ll be sorry Britt got hurt.

Carly may also hope there’s a way forward for Britt and Jason since he really did care about her. “I’m sorry. That’s not going to happen,” Britt declares in Monday’s preview clip. She may argue that Jason made his choice – and now she’s sticking to her own by refusing to be a consolation prize.