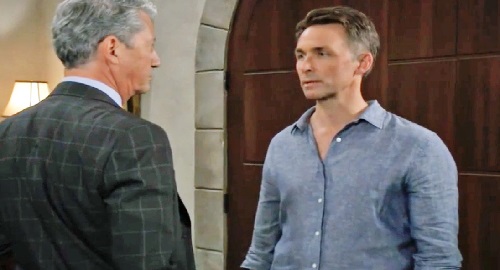 During the week of October 11-15, Carly Corinthos (Laura Wright) will try to clear the air with Britt Westbourne (Kelly Thiebaud). Things will be less tense by the end of this conversation, but Britt won’t be willing to just rewind the clock and take Jason back after the painful blow he delivered.

As for Josslyn Jacks (Eden McCoy), she’ll want Cameron Webber (William Lipton) to open his eyes and see that Esme Prince (Avery Kristen Pohl) is playing him. Josslyn won’t buy Esme’s crocodile tears over Spencer and his fractured friendships at all.

It also looks like Esme will work out the details of the work she plans to do at Spring Ridge, which will allow her to inch closer to Ryan Chamberlain (Jon Lindstrom). Meanwhile, Sonny will call a truce with Jasper “Jax” Jacks (Ingo Rademacher) and hope that it sticks.

Back with Carly, she’ll contemplate making a bold move that Jason isn’t so sure about. Jason will catch Carly and realize she could regret what she’s about to do, so he’ll want her to consider all her options.

Carly may argue with Jason about whether she should come clean to Sonny about their marriage turning real in the end. Jason and Carly were on the verge of building a true life together, so Carly may not think she can bottle that up inside any longer.

Sonny will lay down the law with Nina when it comes to the boundaries of their awkward new relationship in Port Charles. Afterward, Sonny will demand answers from Jason, so it sounds like Carly may go through with her confession plan.

As for Austin Gatlin Holt (Roger Howarth), he’ll try to convince Jason he’s one of the good guys. Brook Lynn Quartermaine (Amanda Setton) will hope to prove the opposite by threatening Austin with a HIPAA violation, but Olivia Quartermaine (Lisa LoCicero) will hit the roof. She’ll reel over Leo Falconeri’s (Easton Rocket Sweda) possible autism and how Brook Lynn is using it as a manipulation tactic.

Sonny and Carly will have a crucial conversation about their future while Spencer gets backed into a corner. This is building to Spencer’s arrest and Esme’s desperate plea to Nikolas Cassadine (Marcus Coloma), who’ll likely stick to his guns and insist Spencer is on his own.

In Greece, Robert Scorpio (Tristan Rogers) will uncover a buried secret. Could Robert find out that Holly Sutton (Emma Samms) is actually still alive and needs his help?

During the week of October 18-22, Anna Devane (Finola Hughes) will make a shocking decision as she continues her mission with Robert. GH spoilers say Anna will come to Valentin’s rescue eventually – and not a moment too soon since Victor Cassadine (Charles Shaughnessy) will put some cruel plans in motion.

Damian Spinelli (Bradford Anderson) will do some digging and report back to Jason with confirmation on something. That should set the stage for Jason and Britt to get some disturbing updates before their trip to Greece. Jason will refuse to bail on Britt when she could be in danger and will want to help her find Liesl Obrecht (Kathleen Gati), too.

Other General Hospital spoilers say Spencer will be arraigned following his arrest, so Josslyn and Cameron will show up for him in court. Something tells us Trina Robinson (Sydney Mikayla) will put any lingering issues to rest and show up for Spencer, too.

Sonny will be there for Spencer when Nikolas refuses, so maybe Sonny will replace Spencer’s public defender with an actual lawyer – namely Diane Miller (Carolyn Hennesy). Michael Corinthos (Chad Duell) will also do some bargaining before Jax makes a surprising admission, so more Nina trouble could be brewing.

Ava Jerome Cassadine (Maura West) will feel like Nina has a secret weapon, so that could mean she’ll want Nina to manipulate Sonny using his old feelings. That might be a tactic Nina has to rely on if Michael cuts her off from Wiley Quartermaine-Corinthos (Caleb and Kyler Ends) due to her secrets, including her romance with Sonny in Nixon Falls.

We’ll keep you posted as other news rolls in. GH spoilers say the next two weeks will bring some great episodes, so stay tuned. CDL’s where you want to be for fantastic General Hospital spoilers, news and updates, so stop by often.