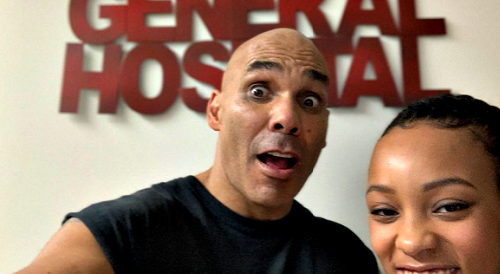 Trina’s understandably upset that Taggert let her grieve his death and put her through all that pain needlessly. It’s a lot for Trina to take.

Well, recently Trina got some advice from both Jasper “Jax” Jacks (Ingo Rademacher) and Ava Jerome Cassadine (Maura West) about forgiving her father. Both Jax and Ava suggested that Trina not waste time being angry and just be glad that she has her dad back in her life.

Ava even suggested that Trina think about things from her dad’s perspective.

We suspect that Trina will soon forgive her father, and it might be just around that time that Réal Andrews steps back into the role.

Right now, there’s no official confirmation of exactly when Réal will take back the role of Taggert, but his recent Instagram posts from the GH studio with some of his co-stars indicate that he’ll be back on screen sometime soon.

In fact, Réal recently posted a photo of himself on Instagram with Sydney Mikayla, who portrays Trina. Réal’s caption for the post was interesting and reads: “Is Trina Taggert’s Daughter…? Yes or No. #gh #taggersback #abcgeneralhospital.”

Of course, what Réal is referring to is the possibility that Trina could be Curtis Ashford’s (Donnell Turner) biological daughter. As GH viewers will remember, Curtis and Portia Robinson (Brooke Kerr) had an affair back in the day.

Curtis didn’t realize at the time that Portia was married, and when he found out, he ended the relationship pronto.

Well, that’s led a lot of GH fans to wonder if there’s a chance that Trina is actually Curtis’ daughter. And now Réal is playfully fanning the flames of this idea, so we have to wonder whether a big reveal could be coming on the show about Trina’s paternity.

Of course, that would be a huge blow to Trina, who’s already been through a lot where Taggert is concerned.

Surely, if Trina were to find out that Curtis is her bio dad, that would lead to a lot of heartache for her and her family – that would be something much harder for Trina to forgive!

Trina and Portia would probably become estranged, and Trina would have to deal with the fact that she’s been quite rude and outspoken against Curtis, the man who’s actually her father. It would be a big mess.

We’ll see what happens, but fans have been weighing in on Réal’s poll on the matter, with a lot of people thinking that Trina probably isn’t Taggert’s bio daughter. One person responded by saying: “Nope! I’ve had a feeling she [Trina] was Curtis’ since Portia came to town… “

And someone else said: “No, Portia has been putting out signs. Such as her stubborn streak just like Curtis.” Others indicated that they really hoped that Taggert was Trina’s father, even though they thought there is a good chance that he’s not.

At any rate, we’ll all have to tune in to General Hospital in the coming weeks to see exactly where this storyline goes. Do you think that Trina is Taggert’s daughter? Stay tuned to the ABC soap and don’t forget to check CDL regularly for all the latest General Hospital spoilers, daily episode recaps, and news.