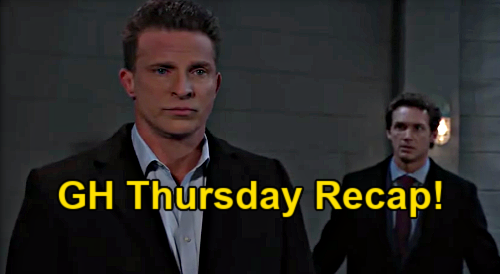 General Hospital (GH) spoilers recap for Thursday, February 18, reveal that Curtis Ashford (Donnell Turner) talked with Portia Robinson (Brooke Kerr) at the hospital. Curtis heard about how Jordan Ashford (Briana Nicole Henry) turned down Cyrus Renault’s (Jeff Kober) offer to save Marcus Taggert (Asante Jones). Curtis said he had no pull with Jordan, and that they were officially separated.

Curtis and Portia went into a room for privacy and had a lengthy conversation about how there were too many lies and omissions in the marriage for Curtis.

Portia lent an ear and Curtis said that he wanted to refocus his life, and that this next PI assignment at the nightclub would be his last one. Curtis asked if Portia still wanted to come along on the stakeout, and she agreed.

Elsewhere in the hospital, Cyrus was in no mood for Brando Corbin’s (Johnny Wactor) excuses. Cyrus told Brando that he might not have his job any longer, and he blasted Brando for not being able to find his mother.

Brando said he needed time, and Cyrus told Brando to find his mother or he’d be terminated.

In the boardroom, Britt Westbourne (Kelly Thiebaud) and Jason Morgan (Steve Burton) talked about how Cyrus’ new painkiller was going to get approved. Britt said that Cyrus lied about the promising research and that she did her own research.

But when Britt looked up the findings of her research on the GH system, her files were gone.

As Britt’s hand shook, Jason told her that she should do nothing about her missing research files for now. Jason said that he could back Cyrus off for now and that he had leverage. “What leverage?” Britt asked. “I can’t tell you now,” Jason said. Jason then got a text from Brando to meet.

Jason took off, and Britt looked at her shaking hand. Britt called and made an appointment with a specialist, saying that she was referring a patient with intermittent tremors in her right hand.

Nina explained that Carly was on the cliff with Nelle, but Jordan said that Carly’s statement to the police said otherwise. Jordan agreed to look into it, and Jordan left the office after gazing at a photo from her wedding to Curtis.

Just then, Jackie Templeton (Kim Delaney) walked up, saying that she found Martin’s mother in Vermont and that Bobbie Jones (Jacklyn Zeman) was in Vermont caring for a patient.

Martin wanted to leave immediately for Vermont, but Jackie said that she would work solo on this. Just then, Nina walked in and over to the bar, and Valentin noticed. Valentin walked over to Nina, and Nina filled him in on Carly and Jasper “Jax” Jacks’ (Ingo Rademacher) lies.

Valentin offered his support to Nina, saying that all he cares about is her. “I would do anything to make up for what I did to you,” Valentin said. “Then prove it,” Nina said. “Help me make Carly pay.”

Over at their table, Jackie and Martin kept arguing about whether Martin was going to Vermont. Cyrus ambled in and heard the word Vermont, and Jackie covered, saying that she was going to Vermont to the Mountain Landing Facility where Florence Grey (Annie Abbott) was taken.

Cyrus said he had someone on it already, and when he left, Jackie finally relented to let Martin come to Vermont with her.

At the Corinthos house, Josslyn Jacks (Eden McCoy) asked Carly and Jax what the scene at the cemetery was about. Jax and Carly told Josslyn the story about what happened on the cliff and how Carly lied to the police. Josslyn said that Carly did the right thing.

Later, Jordan arrived and asked Carly if she pushed Nelle to her death. Carly said no, and Jordan warned that she’d have to notify the feds about this new information from Nina.

At the Tan-O Bar, Phyllis Caulfield (Joyce Guy), Lenny Caulfield (Rif Hutton), and Sonny Corinthos (Maurice Benard) looked around the vandalized and robbed bar. Officer Ralph Finchley (Tatum Shank) arrived with some questions and immediately wondered what Sonny might have had to do with it.

Sonny explained that he drove a drunk patron home, and that he locked the bar up before he left. Officer Finchley said that “Mike” was a liar, and both Phyllis and Lenny defended Sonny, while the officer said that he showed up right as the string of robberies in the area started.

Officer Finchley went to check Sonny’s room, while Phyllis lamented that the officer was obviously gunning for Sonny. Officer Finchley came back and said that Sonny’s room was clean, and he and Sonny eyeballed each other menacingly. Sonny, Lenny, and Phyllis went about cleaning up the bar, and Sonny said he was staying.

Back in Port Charles, Brando and Jason met in an alley. Brando fussed with Jason about how Cyrus is going to terminate him if he doesn’t find Florence, and Jason matter-of-factly said that Brando had a problem. “So, that’s it? You’re not going to help me?” Brando fumed.

“I did my best for Sonny! If I’m on my own now, so be it!” And with that, Brando walked away. Jason whipped out his firearm and shot in Brando’s direction.

That was a fantastic episode of General Hospital, and there’s much more coming tomorrow. Stick with the ABC soap and keep checking back with CDL for all of your General Hospital spoilers, news, and daily episode recaps