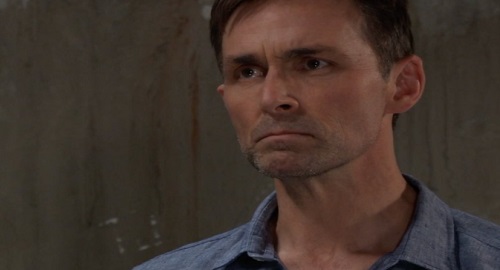 At The Savoy on Tuesday’s GH episode, Portia Robinson (Brook Kerr) realized Curtis Ashford (Donnell Turner) was closing the place up for the night. She assumed she was too late for a drink, but Curtis insisted he was always open for her. Portia said to surprise her on a drink choice, so Curtis went with a simple glass of wine.

Curtis and Portia talked about Jordan Ashford (Briana Nicole Henry) making progress in her treatment and about how Roger Barstow’s knowledge got him killed. Portia eventually admitted she was struggling to adjust to Trina Robinson (Sydney Mikayla) living in the dorms, so Curtis suggested making dinner plans.

At the casino in Monte Carlo, Dante Falconeri (Dominic Zamprogna) asked Dallas Kirby (Laurine Price) questions about herself. Dallas admitted to working with a defense contractor before going out on her own with a firm that provided consulting services. When Dante kept grilling, Dallas got suspicious.

Sam eventually made her way in, so an annoyed Dallas took off her bracelet and offered the money in the room. If this was a robbery, Dallas suggested she could give them a head start. Sam made it clear that they just wanted information – and Dante backed her up.

After Dante said he was a cop and mentioned a close connection to the WSB, he didn’t think Dallas wanted them sniffing around her consulting firm. Dallas was asked if she’d ever done a job for Shiloh Archer (Coby Ryan McLaughlin), so she called him a “bastard” and said she helped him a couple times before she got a better gig.

The last job Dallas had was a couple years ago when Shiloh served as a go-between for someone else who was willing to pay generously. Dallas was hired to fake a plane crash, so she explained how she made it look like a charter jet went down with no survivors.

Meanwhile, Victor wanted what Peter had promised him, which was the means to access the conditioning installed by Cesar Faison (Anders Hove). The first level of Drew’s conditioning had already been disabled, but the second level was accessible through a simple key that Peter claimed he hadn’t found yet.

Victor felt like it was taking too long and wondered if it was even worth the trouble anymore. That’s especially true since it would take a great deal of time and resources to find Peter’s thoroughly lost daughter! Peter insisted he wanted his little girl along with her mother and vowed to get Victor the key to control Drew in return.

At the U.S. Consulate’s medical facility, Robert Scorpio (Tristan Rogers) and Anna Devane (Finola Hughes) were surprised to see each other. Since they were working on the same case, Robert suggested teaming up. Anna pointed out she’d been working with Valentin, but Robert expressed lingering trust issues.

Once Chloe Jennings (Phoebe Kuhlman) was awake and could take questions, Anna and Valentin got her to walk them through everything that happened to her. Chloe filled them in on Drew helping her escape and wondered who was behind her abduction. She learned it was Peter August, the last man she had contact with on the outside.

In Monte Carlo again, Sam felt like Peter must’ve been the third-party Dallas alluded to. Dante wasn’t so sure Peter could’ve done all this on his own and felt like they might be missing something.

Sam worried about Drew trying to figure out who he was and build a new life for himself once he was found. The Drew that Sam thought she loved never really existed, but Dante still saw a path forward for Drew with support. Unfortunately, Sam and Dante were distracted enough by this conversation to miss Anna’s phone call.

Next, Valentin woke up in Drew’s cell and realized he’d been kidnapped. Drew and Valentin compared notes, so that led to Drew finding out Valentin had been on the island of Crete.

Valentin got updates on Liesl Obrecht (Kathleen Gati) ending up there and filled Drew in on the injured Chloe situation. There was also talk about Victor’s involvement and how Peter was clearly racking up a lot of debt with him.

Although Valentin knew Anna would find them sooner rather than later, he felt like Peter would know the security of the location had been compromised. Drew and Valentin determined that one or both of them could be killed as a result.

Since Drew didn’t know how much time they had left, he got Valentin to tell him what he knew about Scout Cain (Ella Ramaceri). Valentin knew quite a bit since Scout often hung out with Danny Morgan (Porter Fasullo) at the Quartermaine mansion. He told Drew that Scout was a tomboy, but she also wanted to do ballet since Charlotte Cassadine (Scarlett Fernandez) was getting into it.

A guard showed up for Valentin, who was taken away as he told Drew to kill Peter if he found him. That left Drew to mull over his little tomboy ballerina and stare at Scout’s name etched on the wall.

Valentin was led to Victor’s location next. He warned Victor that Peter would double-cross him, so Victor suggested Peter had already started. Victor wanted Valentin’s help since Peter would kill them both unless they worked together.

Back in Drew’s cell, he was surprised by Peter’s arrival. “You spineless bastard,” Drew snarled. “Finally, you show your face.” Drew argued that Peter couldn’t make him do anything, but Peter pulled out a tarot card of a tower and told Drew he was active.

After Drew seemingly fell into a trance, Peter called him “soldier” to get his attention. Drew’s eyes snapped up to look at Peter as he declared that he was reporting for duty. Peter then told Drew that he had a new mission.