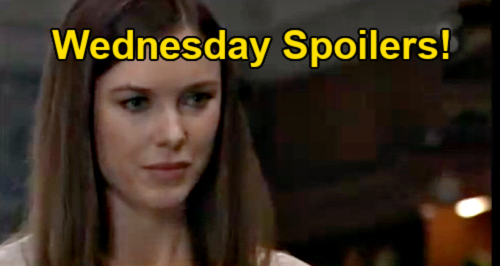 GH spoilers for Wednesday reveal that Chase will confront Willow and Michael. After he discovered the two in bed together, Chase and Austin Gatlin-Holt (Roger Howarth) stayed in the gatehouse while Michael and Willow returned to the party.

Willow couldn’t find Chase anywhere and is unaware that he knows the truth.

When Chase announces that there is something he needs to say to her and Michael, Willow gulps. She tries to brace herself for what is coming.

The preview clip for Wednesday, August 4, shows Trina talking to Portia Robinson (Brook Kerr). The doctor has tears streaming down her face. She must finally tell Trina the whole story as her anger turns into compassion and empathy.

Trina asks her mom if she’s been in love with Curtis Ashford (Donnell Turner) for all of these years.

The confession and realization will be a turning point in the relationship. It will also make Trina realize that not everything is black-and-white.

Unfortunately, it just ended with Jordan being rejected and a bit humiliated. She will have to deal with the fact that her marriage really is over for good.

Meanwhile, Curtis confronts Stella about her relentless interference. Stella has a tearful confession and explains that she just didn’t want it to be too late.

While Curtis will understand she had good intentions, he doesn’t know how to be any clearer than “stay out of my love life.”