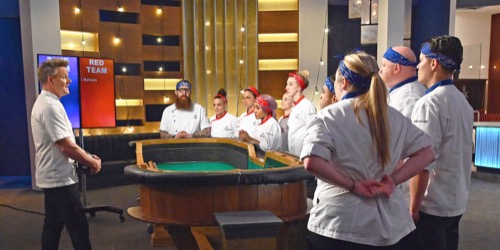 Later, the chefs with the winning dishes from the earlier challenge nominate two chefs from each of their teams to cook for their lives”

In tonight’s Hell’s Kitchen episode Jordan knows she made a couple of mistakes at dinner service, but she doesn’t consider herself the worst. Jordan is freaking out, she keeps moaning about the last service. Lauren thinks she needs to snap out of it, or she is going to have problems again.

Gordon calls everyone to the kitchen and there are four men in unitards standing there; they are acrobatic performers. Gordon wanted to showcase the power of teamwork. In the next challenge, they are going to play the only team game in Las Vegas casinos, craps. Jason and Christina bring out a craps table. Each person will take a turn rolling multi-sided dice.

Whichever letter they roll, they must name an amazing ingredient with that letter. One person from the team will roll twice. Cody rolls H for haricots verts, Kori rolls M for mushrooms, Amber rolls C for celery root, Lauren rolls R for rice, Adam rolls C for carrot, Mary Lou rolls M for monkfish, Marc rolls P for pork, Nicole rolls M for miso, Declan rolls H for honey, Jordan rolls T for Thai chilies, Cody rolls S for serranos, Kori tolls S for sprouts. They have forty minutes to use the ingredients to prepare their own individual dishes.

The cooks are ready to present their dishes. The red team; Kori 4, Jordan 4, Nicole 5, Mary Lou 3, Lauren 3 for a total of 19. The blue team; Amber 2, Marc 2, Cody 5, Adam 5, Declan 5 for a total of 19. It will come down to the best dish. Gordon chooses Nicole and Cody’s dishes. The blue team wins ad Gordon tells the team that they will all be doing a thrilling high wire act, walking the tightrope. Adam is so excited to get out of Hell’s Kitchen.

The red team will be preparing Beef Wellingtons for the dinner service.

This reward is great, but Amber is terrified of heights. Cody volunteers to be first. Marc does a great job, it’s like he is dancing on the rope. Declan gives it a try but says it is not his cup of tea. Meanwhile, the mushrooms arrive in Hell’s Kitchen. The blue team arrives at Nobu for lunch where the chef prepared a special meal for them. Declan says he feels like a king. Gordon joins them, Cody says Marc was doing salsa dancing on the tight rope.

The blue team is back from their lunch with Gordon and the red team is finished their Wellington hell. Gordon calls everyone to the dining room. Gordon says to hurry, so the cooks run out of their dorm-like bats out of hell. Gordon says he has something important to tell them, tonight he is closing hell’s kitchen. There is no dinner service, but one of them will be leaving the competition. In the morning’s challenge, Nicole had the best dish on the red team. Blue team, Cody had the best dish. The two of them will decide, which two members from each team they will be better off without. He tells them to have one on one meetings with each member of their teams and then tell him who they nominate.

Lauren thinks that Nicole is one of the weakest chef’s there and doesn’t deserve to nominate two people. Nicole has no idea the two who should be up for elimination. Meanwhile, on the blue team Amber says she doesn’t deserve to be nominated, she thinks they just want to put her up because she is a strong competitor. Adam tells Cody if he puts him up, he is going to look stupid in front of Gordon.

Decision time, Nicole is first and she nominates Lauren and Jordan. Cody nominates Marc and Amber. Gordon calls the four nominees to step forward. He tells them that the four are going to cook for their lives. They have forty-five minutes to make something that proves to him that they are worthy of becoming his head chef in Lake Tahoe. Everyone else heads to the dorm.

The four cooks are preparing their dishes, they all have the same protein Filet Mignon and the same vegetables. They are finished and Lauren is up first, her steak was underdone. Marc is next, he nailed the temperature. Jordan sliced the filet, and the rule is, you never do that.

Amber’s sprouts were raw. Gordon tasted all four dishes, It’s a difficult decision, he tells Amber that she can head back to the dorm. She returns to the dorm and tells Cody not to do that to her again. Marc gets to head back to the dorm. That means, two red team members are left. Neither wants to go home and think they deserve to stay. Gordon tells Jordan that Lauren is going home. Gordon tells Lauren that he saw a lot in her, he admires her incredibly. He tells her that if she needs any help after this competition, his door is open.