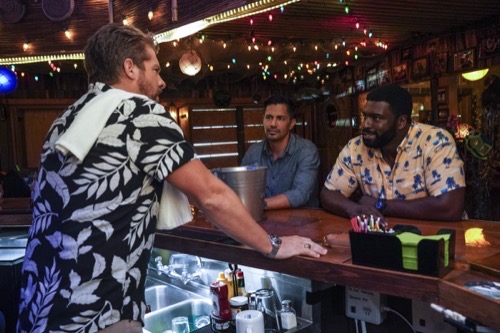 Tonight on CBS their reboot of the classic series Magnum P.I. airs with an all-new Friday, January 8, 2021, episode and we have your Magnum P.I. recap below.  On tonight’s Magnum P.I. season 3 episode 4 “First The Beatdown, Then The Blowback,” as per the CBS synopsis, “Magnum and Higgins help an up-and-coming mixed martial arts fighter who is being pressured by a gang to throw an illegal fight. Also, Kumu is arrested for stealing an artifact from a collector that should be returned to its original resting place.”

Magnum is in the water, he swims to the shore and gets dressed, then we see him running towards someone’s property. There are two Dobermans but Magnum has an app that makes them run away, he then sprays something on the surveillance camera. As he jumps into the Ferrari, Higgin’s dogs jump in and threaten him. Higgins comes out and she says she anticipated everything and was ready for him. He says he didn’t fail, she says he did. He says this is about her always having a win. All of a sudden, we hear police sirens, Kuma comes out of the house and tells them to relax, the police are there for her.

At the station Kuma shrugs off that she was handcuffed and brought in. Higgins tells her they are accusing her of grand larceny in the third degree. She says it is a mistake, it is probably grand larceny in the first degree. What she took is worth half million easily. She stole an expensive artifact from a wealthy collector and she is not giving it back. Yesterday this man asked her over to look at this artifact. She says it is a skull of a young boy who was killed in battle. As legend has it, the boy longed to be a great warrior like his father.

He followed his father into battle, the army was overwhelmed, he joined the fight to only be driven off a cliff with his father and other warriors. She wanted the skull to be given to the cultural center, but the man said he paid good money for it and he was keeping it. She stole the skull, it wasn’t a great plan but she wanted to get the skull back to where it belongs. If she returns it, they will dismiss the case, but she won’t do it. She believes the skull needs to be put at peace, not displayed in a rich man’s house.

Gordon is helping his son Denis with his home work, his father gets upset with him when he looks for the answer online.

A man comes into the station, he is very upset. His twenty-one year old daughter, Kai is missing. She got off the plane, but somewhere between the gate and where is was going to pick her up, she went missing and her phone is turned off. Gordon tells him that he understands that he is upset, he is a father, but they can’t do anything for twenty-four hours because she is an adult.

Gordon brings the case to Higgins and Magnum. They meet with Kai’s father and tell him they will look into it immediately. They head to the airport, he wants to see security footage from terminal two from earlier in the morning. They see footage of Kai, and two very unfriendly men pick her up. They show the tape to Gordon who says the two men are soldiers for Matsui, they are making inroads in Hawaii recently with narcotics, gambling and vice has been trying to shut them down. It doesn’t look like an abduction, Kai looks like she is going willingly; there is no obvious crime.

Kai’s dad calls Magnum and tells him false alarm, she went to the wrong terminal and lost her phone, all good. Higgins says she is glad that she is safe. Magnum thinks it is weird, why would Kai lie to her father. It really bothers Magnum, Higgins says she will track her phone for him.

T.C. stops by to see Kuma, she tells him that she won’t give it back, he tells her not to worry, he has her back. She made cookies, she offers him milk and cookies. He says for the record, he thinks she is doing the right thing and he wants to make sure she buries it in the right place. She tells him to worry, it is stashed in the laundry room in the guest house. She says it is temporary, she plans to put the skull back to where it came from two centuries ago. He says he will help her, they always help each other, he has her word on that.

Kai is a martial arts expert, Higgins and Magnum visit her at the gym. He lies about who he is and she leaves him to go speak to the same soldiers that picked her up at the airport. She returns, but tells them she can’t talk. Magnum figures he will just go an introduce himself to the soldiers. Gordon shows up and asks what is going on, the men say nothing, they were just leaving. Magnum says they are a bunch of gangsters and they want Kai to throw a fight. They go back inside and watch Kai fight, she tells them to leave because they are distracting her, and she is not interested in speaking to her. They head out, but they wait outside for Kai.

Kai comes out of the building, they follow her and don’t get far, Kai stops the car and gets out. She says she looked into them, they were lying about who they are. Magnum tells her they are PI’s hired by her father when he was worried about her. Magnum tells her they can help. She says there is a fight tonight, a lot of money on it, they want her to tap out in the third.

Magnum tells her that if she does this they are going to be after her for her whole career. She says she is doing it for her dad, she needs to take care of him. Higgins warns her that she can’t get in too deep she needs to walk away now. She says even if she wants to back out, she can’t, these are not the people you say no to. Kai leaves.

The skull is verified, it is real. Kuma says they have to replace the skull to it’s proper burial place.

Kai stops by the bar in a panic, the soldiers grabbed her dad. If she thinks about backing out, they are going to kill him. Magnum tells her to go to the fight, they will find her dad. Magnum enlists Rick’s help.

Kai brings Rick with her for help. The soldiers put her in a van, Rick tells her to concentrate on the fight, not her dad right now. They arrive at the fight, Higgins and Magnum are watching. Gordon is on the case, he is trying to find Kai’s dad. Magnum has an idea, get the address from where Kai’s dad is, from Matsui directly. Higgins and Magnum are in the fight area, she taps into Matsui’s phone to get information on where Kai’s dad is. It is time for Kai’s fight, she is not paying attention and is getting hit everywhere.

Meanwhile, Gordon and his men find her father and take out the soldiers who are holding him hostage. In the arena, Kai is being beaten bad until Rick tells her that her dad is ok, he is safe and she can kick her opponents butt. Kai goes into full fight mode and beats her opponent. Matsui and his men storm out. He instructs his men to bring Kai to him. Outside, Magnum and Higgins tells him that he is done. He says he has an army that says otherwise, all of a sudden, Gordon shows up with plenty of backup and helicopters to take down Matsui and his soldiers.

Kai is reunited with her dad, they hug each other – he tells her that he was so worried about her and thought he would never see her again. Higgins tells Magnum that she is sorry for earlier that morning, she cheated, to make it impossible for him to win. She says she doesn’t mind losing, she just doesn’t like losing to him.

Kuma is joined by locals to replace the skull to his original place, cops show up to arrest her. Higgins, T.C. Magnum, Rick and everyone, say they were in on it and they will have to arrest everyone. They give up a fake skull, figuring nobody would know the difference and put the real one where it belongs. Sgt. Lukela asks if he can stay for the ceremony, Kuma says they would be honored.