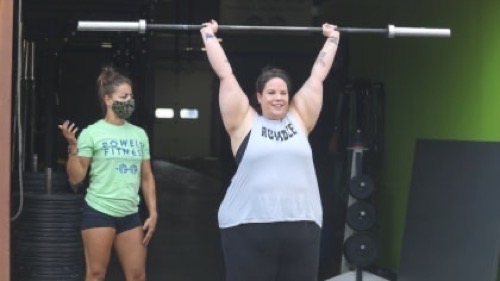 In tonight’s My Big Fat Fabulous Life season 8 episode 11, “Weight-Loss Surgery,” as per the TLC synopsis, “While Whitney is undecided about where to live, the Greensboro crew hatches a plan to lure her back home and away from Ryan — for good; with the fate of the business in jeopardy and her love life in ruins, Whitney faces some tough decisions.”

Whitney is visiting with Tal. She is in Greensboro for a quick trip. They walk and talk. She talks about returning to Greensboro. She doesn’t know what to do though because Ryan has given her an ultimatum about their business. She knows they can work remote. She and Tal go back and forth about what she should do.

Ryan and Chase video chat. Chase is about to be a dad. He shows off all of the new baby supplies. The baby is coming soon in just a few weeks. Chase’s life has changed for the better, he shares. They talk about Whitney. Ryan thinks she wants to get away from him because he reminds her of Chase.

Whitney meets up with Jessica to work out. It has been months since she has lifted. Whitney manages to lift 85 pounds. She is actually surprised. She and Jessica talk about partnering up if she moves to Greensboro. Ryan seems done with her if she moves. She doesn’t want it to go that way. She just has nothing left for her in Charlotte.

Whitney returns home and meets up with Ryan out for drinks. They talk through some things. They are both sorry. Whitney explains that she isn’t looking to quit but she is trying to figure out her life. After they continue to talk further, Whitney decides she will give Charlotte some more time. She then needs to decide about signing her lease.

She heads home and asks Buddy what he plans to do. She tells him she plans to leave if he doesn’t stay. She talks about how online dating has been tough. Some rude people have made some hurtful comments about her weight. This has her thinking about weight loss surgery.

Buddy and Whitney meet up with Tal and their other fiends half way between Charlotte and Greensboro. They reveal that they have signed a lease for 7 more months. Whitney tells them about Ryan’s ultimatum as well. They all think he has some nerve. It is her business. She then shares she was thinking about weight loss surgery. They are all shocked. They want to know what is going on. She vents about feeling bad about herself.

Her friends all tell her she needs to decide what she wants to do but don’t do it for people because they will always want something else. They support her if it is for the quality of her life. She cries. She feels like time is running out and she hasn’t accomplish anything.