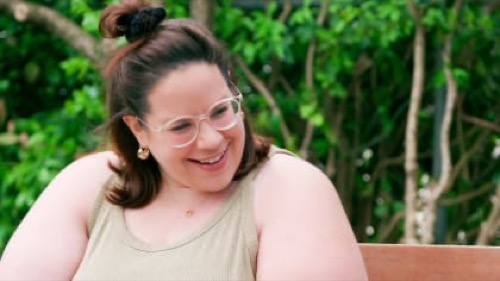 In tonight’s My Big Fat Fabulous Life season 9 episode 2, “A newly vaccinated Whitney sets up the first date with her mystery French man; Buddy finally agrees to meet up with Whitney after months of dodging her.”

In tonight’s MBFFL episode, Whitney and Hunter head to get vaccinated. Hunter shares he may head back to New York to return to his normal life. Whitney doesn’t want him to go. She likes him being with her parents. They arrive to get vaccinated. Whitney gets emotional. It has been a long time since she could love life normally.

Ashley comes to visit Whitney and do some work for the business. She brings her daughter. They discuss Whitney’s French love interest. Ashley thinks she needs to jump into this relaxed and enjoy it. They move on to talk business. They are invited to Georgia on a retreat. Whitney thinks about it. Ashley thinks she needs to getaway. She has been home a lot lately and alone since Buddy has been with his girlfriend. Whitney is annoyed that she and Buddy had a life plan and now he is never around. She plans to talk to him.

Whitney’s parents come to visit. Her mom is going to attend a French lesson with her tutor. Her mom is very curious. Whitney seems up expectations with her mom, telling her not to be extra. When the session starts, Babs thinks he is sexy. Babs is good at picking up the language. Whitney and her tutor flirt a little. Babs excuses herself for a few minutes. The tutor admits he isn’t opposed to plus-size women.

Babs sighs at the end of the lesson. Whitney knows how she feels. Whitney wants to turn her tutor into a suitor. Later, Whitney and Todd meet at the studio. They are locked out and decide to work on a dance in the parking lot. They have fun dancing around. Todd has some great moves to teach Whitney. The talk about BS Dancing. After, they talk about Whitney’s upcountry birthday. They talk about a joint birthday.

Whitney and Ashley follow up on the invite to Fat Girls Retreat. Th make plans to go. They speak with Annette. She tells them how they will have fun, ride bikes, do a photoshoot, and more.

Whitney finally meets with Buddy. She wants to figure out their living arrangements especially since they aren’t really friends. They talk and walk. She tells him about the French guy in between getting in jabs that they don’t really talk. Whitney wants an apology for him just leaving her high and dry. She is hurt. She is not going to beg to spend time with him. Buddy feels torn. He really likes his girlfriend.

Whitney asks if they will marry. Buddy gets shy. He shares that they have talked about marriage. Whitney gets irritated and tells him to get his stuff out. She asks for a hug and again he gets weird. Whitney feels like he has really checked out. Their friendship may be over.