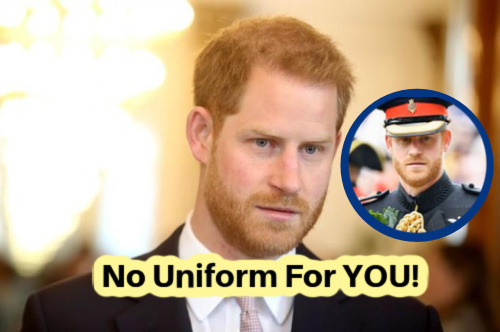 British royal family news shows that Hollyweird Prince Harry has been forbidden from wearing his shiny little military uniform at an event next week. He is tapped to dole out prizes on board a warship in New York, and there’s no word yet if Meghan will be on hand with a briefcase full of cash.

He was stripped of his honorary military titles when he quit the royal family with a sneaky move called Megxit. He is now living in California and the concept that they are no longer royal has not sunken into their heads.

The party is a day before Veterans Day and Prince Harry will wear black tie but he is allowed to pin all four of his four medals on his suit. Unlike disgraced Harry, the other war veterans and servicemen present on the aircraft carrier will be in full uniform. It’s been reported that the Royal Family acquiesced to greedy Harry and allowed him to wear his uniform at the Duke of Edinburgh’s funeral in April, in order to not let the man-child feel embarrassed. Concessions like this are the reason why he doesn’t learn.

Last year he made the bad move of taking a private photog with him to the Los Angeles National Cemetery and paraded himself around, in uniform, while doling out flowers to dead strangers. We’re sure the families were not amused by his antics. He and Meghan resorted to the PR move after he was not allowed to have a minion put a wreath down for him at the Remembrance Service in London. The whole concept of not being royal after one rejects the royal family is a lesson Prince Harry seems incapable of learning.

Prince Harry is a Slow Learner?

Harry is now a civilian and has lost three honorary military titles and his role as Captain General of the Royal Marines. What was the trade off? The greedy redhead declared that “financial freedom” was more important than anything else in the world so he ditched the royals and reinvented himself in America. Unfortunately neither he nor his wife have adequately absorbed the fact that the English no longer rule the land.

At the event, “Harry will celebrate five service members, veterans and military families living with, the invisible wounds of war,” according to The Sun. The event is called The Salute to Freedom and it takes place at the Intrepid Sea, Air & Space Museum on November 10.