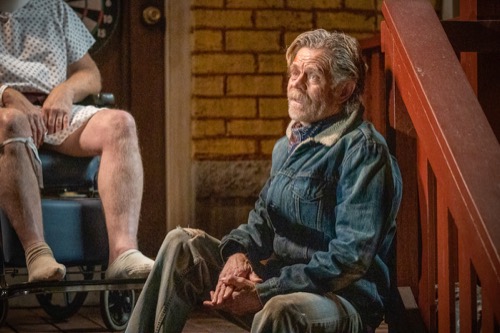 Tonight on Showtime the uniquely twisted and highly entertaining show Shameless returns with an all-new Sunday, February 14, 2021, season 11 episode 6 called, “Do Not Go Gentle Into That Good….Eh, Screw It,” and we have your weekly Shameless recap below. On tonight’s Shameless episode, as per the Showtime synopsis, “A surprising twist of fate has left the Milkovich’s vulnerable, forcing Ian and Mickey to step in to help. Frank’s day takes some unexpected turns and Liam deals with inner turmoil after doing a bad thing.

Debbie confronts Sandy on their relationship, while Carl enjoys the spoils of his day off. Lip and Brad seek revenge on the new BornFree owners, all the while Lip is forced to figure out a plan for the future. While Kev runs the bar, V is class parent at school – but elementary school looks a little different these days.”

Tonight’s Shameless season 11 episode 6 is going to be great, and you won’t want to miss it. So be sure to bookmark this page and tune in for our coverage of Shameless tonight between 9 PM – 10 PM ET! While you wait for our recap, make sure to check out all our Shameless spoilers, recap, news & more, right here!

Frank is making out with Lennie, who he calls Monica, while Brad, Ian, Lip, and Mickey are loading a motorcycle into a truck.

Lip is making breakfast, Tami is surprised. He says he got up early to meet with Brad. She says she saw her dad yesterday, he might lose the house, Cami’s baby cleaned him out. She told him that she would talk to him about maybe move in there. She says they don’t have a choice, he got fired, they have bills to pay. He doesn’t want to, he says he feels like he has to put on a shirt every time he wants a coffee. He says he will figure it out.

Ian is making coffee, Mickey comes in with donuts. Carl has a day off, Frank walks in and says he say nothing in the front yard, it’s great. Debbie says that she is finally getting her ankle monitor off.

V and Kev are getting the girls ready for school. Meanwhile, Liam asks Frank if he believes in God. Frank says hell is like prisons, just a way to frighten people into submission, you can buy a pardon from the Catholic church just like you can buy a judge. And if he is worried about anything, just light a few candles and say a few hail marys. Unless of course, he did something really bad, then he will be tormented in the deepest depths of hell until eternity. Franny starts getting upset that Sandy is not there, Debbie says she is off somewhere learning how to be single.

Mickey comes out of the house with Ian, he sees his family arguing, they don’t know who is going to take care of Terry when he gets back. So they are playing Russian Roulette to decide. Mickey tells Alec that he is doing it, he is Terry’s favorite, duty calls. Back at the house, Carl is in the basement, he plans on moving down there to have quiet.

Frank goes to see Mrs. G., she says they are settled up, she owes him nothing. Her son comes out, Frank tells him that his mom is trying to pull a fast one. The son hits Frank in the face.

Brad stops by Lip’s house, Lip says they sell the stuff from Born Free and that will carry them for a while. Brad asks Lip if his brother the cop is going to be a problem, he says no.

Mickey and Ian pick up cash at the bar and head on the road. At school, Liam bumps into Timmy at school and just wants to tell him he is sorry about Terry. Timmy is suspicious and says when they find the bastard that shot Terry, they will cut him up, bleed him out, grind him and feed him to their dogs.

Carl is at a furniture store, he sees a man shouting at a store clerk. He walks up and tells the man to go away when he finds some manners. The man leaves and the clerk introduces herself to Carl, her name is Tish. She then offers to help Carl, he is looking for a chair, she offers to give him her employee discount and her phone number.

V is at school with the girls when they have their weekly active shooter drill, or as their teacher calls it, hide from the bang bangs. The woman who is organizing the drill chooses the white boy to be the shooter because she says statistically white boys are shooters and accuracy is important. She actually has the young boy wear a vest with toy ammunition and run around the school with a rifle type of water fun. V is shocked, she says this is messed up.

Debbie is upset about Sandy, she vents to Mickey and Ian. Lip arrives, he tells Mickey he has no place to store the bikes he needs to get them off the truck and sell them, he needs the money. Mickey says he will take care of it.

Frank is getting his head stitched up, a woman found him and called an ambulance. Frank is worried about the cost, the attending physician asks him what happened, he says he hit his head. She asks him some questions and when he can’t answer them right, she tells him that she needs to take some tests.

Terry arrives home, Mickey tells Ian he can go over there and scoop his eyeball out with a spoon and he wouldn’t be able to do anything about it. Mickey asks Ian if he wouldn’t do the same thing to Frank. Ian says he wouldn’t wish it on him. Mickey says Frank is not a homophobic psychopathic who tortured you every day for years. Ian says no, he is just an emotionally abusive alcoholic who stole his money for drugs, broke his nose, tried to profit off his mania. Ian says they both had crap dads.

Sandy is back, Debbie asks her why she hasn’t answered her texts and she says she was busy. Sandy says she is sorry, she has things under control. Debbie says she is done and tells her to have a good life with her husband. Terry starts running off his mouth and everyone leaves him outside on the sidewalk.

V speaks to the teacher, she says she doesn’t like the drill, the teacher ignores her and tells her it is the only cardio the kids are going to get, pretend to be running away from a shooter.

The guys ask Kev if they can store the bikes in the space that he used for the gym, for a percentage, Kev agrees.

Debbie is in a gay bar to do a job, she is putting up a sign. Meanwhile, Carl and Tish grab a bite together.
Frank bumps into his lady friend at the bar while Liam hides the gun in a chest, down in the basement. Debbie is invited to the opening of the gay bar and to bring a guest.

Tami catches Liam with Born Free boxes in the garage. He gives in and tells her that they stole from them, he needed to do something to save them. Tami asks what this is going to fix for Fred if he gets caught and goes to jail. He says he has a plan, they leave, they sell the house, they all take their share and they can use theirs to get their own place.

Terry is outside complaining that he was left outside and it is going to rain. Mickey can’t listen to him anymore, so he goes outside, pulls Terry up the stairs, Ian comes out and helps him. Mickey tells Terry he hopes the pain meds wore off and as he bumps him from step to step up the stairs. Ian tells Mickey that he is so much better than his family.

At the Alibi, V has walked in and tells him that he is not happy about the active shooter drill. Kev really doesn’t know what the big deal is.

Frank arrives home and sees Terry on his doorstep, he tells him that it is the end of an era. And, he wished that he had fallen from his sword, but this will have to do. Terry tells him to shoot him. Frank tells him that he never took him for a coward, a racist yes, but not a coward. Frank says the least he can do is a mercy killing, but Nah, he gets up and tells Terry that he doesn’t like him that much and laughs all the way to his front door.

Debbie arrives home, Sandy is there and asks if they can talk. She says she wants to tell her things but some things she really doesn’t like to think about. When she met Royal, she was fifteen and in a tight spot, her family indebted and he offered her a better life, so she said yes and they got married. She tried to make it work, but it didn’t and she has been going from car to couch ever since. Debbie tells her that she loves her, Sandy says she does too.

Tish is in the basement with Carl, the two make out in the chair, she doesn’t want to use a condom, he says he has this one rule. She jumps on him and he doesn’t have time to put it on. After she leaves, he tells the family that she didn’t want to use a condom and he did, but she jumped him. Debbie says she raped him. Lip and Tami drop by and say they want a family meeting, they want to sell the Gallagher house. Debbie says no way, everyone starts arguing, Frank walks out with a beer. Frank looks at a piece of paper in his pocket, it reads that he has early signs of alcohol dementia.