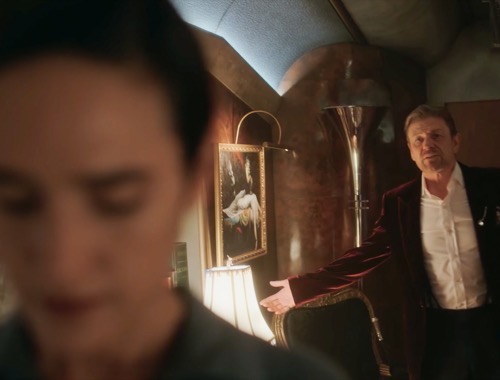 Alex gives Andre, Ruth, and the others a list of demands. After they secure groceries and more, the Snowpiercer will move again.

Suited up, Mel works in the cold while she talks to Ben. Inside, they hear clanking. Ben begs her to finish and come aboard.

Andre and the others hand over the list of items to Alex. They don’t have morphine. The door slams. The train moves forward. Mel rolls out from under it. She grabs a vile of snow and jumps aboard.

Mel takes off her suit. She has a shoulder wound. The water turns on, disinfecting her. She screams. After, she dresses and comes in to see Kevin who shocks her. She is brought to Wilford. He wants to know if Ben is aboard. Alex comes in. Mel is in shock. She didn’t know she was alive. She tries to explain but Alex shuts her down.

Andre talks to the others quietly. They need to hit Wilford before he hits them. Andre takes to the PA system and announces Marshall law. Some are very upset. Wilford is back and imposing on their freedoms and what they have taken back in the last seven years.

Mel talks to Alex through the bars. Alex shares that she couldn’t leave her grandparents. Mel tries to explain what happens but Alex doesn’t believe her.

After sharing that they are pregnant, Ruth brings Andre and Zarah to their very own car for they have a baby on the way. Meanwhile, Mel is treated by some of Wilford’s crazy doctors.

Pike makes a trade through the doors for some weed. Andre catches him. He gets an idea. This is how they get the jump on him. Pike returns to the door and offers up a mango. They open. He lunges. They get in. Kevin tries to stop it but he cannot.

Mel sits with Wilford who is enjoying dinner when he is told that the doors have been breached. He tells Sykes to send in Bob. Andre and the others return to their car when Bob comes out as well as gas being sprayed through the air.

Wilford learns that Kevin is being held, hostage. He knows this all has to do with Mel. He brings her to the control room where she learns Alex is an engineer. Wilford makes Alex stop the train. Mel begs her not to disconnect. She does. It doesn’t work. Mel laughs. They are all stuck together and he has to keep the train going or he will die too.