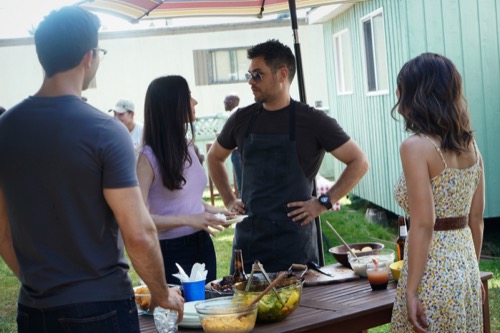 In tonight’s Superman & Lois finale episode, Lois cries and pleads for Clark to find Jordan. John stays behind to help after Edge’s associate is taken into custody. Meanwhile, Kyle tries to help the General who has been injured trying to find Jordan. Lois runs to see Edge’s associate get answers. She taunts Lois and doesn’t give up any information. Kyle and Lana decide to stay and help Smallville.

Superman flies through the skies, listening and looking for Jordan. As mass hysteria breaks out in Smallville, Superman yells for Jordan. He yells back. Superman hears him. The general tries to get the town’s people to go to their homes. Edge suddenly appears above them. Superman finds Jordan but he isn’t himself. He attempts to fight Superman as he is possessed by Edge’s father.

John tries to take out Edge while Superman tries to help Jordan. Superman returns to Smallville unsuccessful. Lois wants to save their son. She has a plan. The next day, John works on a weapon. He explains to Superman and Lois the weapon can help weaken Edge’s power. Jonathan isn’t so sure this will work. They are alerted that Jordan is in the mines. They suit up. John and Superman head there as the town’s people all try to flee.

In the mines, they come face to face with Jordan and some soldiers. Superman fights the soldiers. Jordan is knocked out. John rushes him to Lois. The soldiers come to and head for Superman. With his energy reserves low, John heads back out to Superman to help.

Lois connects to Jordan to show him a memory. Superman rushes to Edge. In town, Kyle and Lana try to help control the chaos as buildings are on fire with people screaming.

Lois digs through his subconscious. Edge’s dad tells her she won’t be successful. As she digs, Jonathan talks to Jordan who is still unconscious. Jordan comes to and is still not himself. Jonathan is forced to use his gun that sends Jordan flying. He gets back up. They fight. Lois is still under and working. Lois finally connects with him, begging him to fight as he sees his memories.

Superman gets rid of the soldiers. He asks John if he is ready. He says yes even with his reserves low, not telling Superman. John throws the weapon. It flies at Edge while Superman holds him in place. John falls into the atmosphere, recalling his dad and his sister. Just as he is about to fade away, Superman swoops in, saving him.

Later, the town all get together for a BBQ and some fun. Kyle got his job back and Lana is thrilled they are staying. Lois gives Chrissy half the money to buy the Gazette. She doesn’t want her to sell. Chrissy is thrilled. They are now partners. The DOD has offered John a job. Meanwhile, the general is stepping down. He needs to focus on his family. Lois and John talk. He needs to move on. He sees Lois and it’s his wife from another planet. He needs to leave to be happy to find happiness. Lois hugs him. Jordan and Sarah walk in a field. He meant it when he told her he loves her. They kiss.

Later, a spaceship drops down on the farm. It’s John’s daughter. She sees Lois and thinks it’s her mom. The whole family stands in awe. John cries.