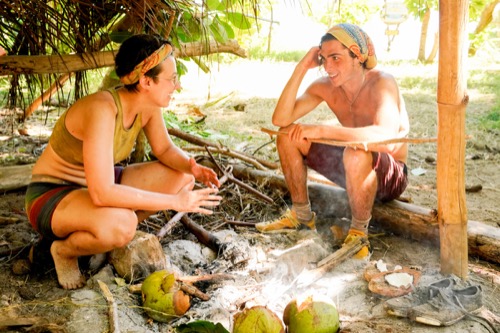 Tonight on CBS Survivor airs with an all-new Wednesday, October 13, 2021, Season 41 Episode 4 and we have your Survivor recap below. On tonight’s Survivor season, 41 episodes 4 called “They Hate Me ‘Cause They Ain’t Me” as per the CBS synopsis, “Two castaways strategize a risky move during the immunity challenge, and another castaway does what it takes to earn a tribemate’s trust.”

In tonight’s Survivor episode the episode begins at UA, it is night seven, Genie is upset, she was the only one that was more blindsided by Brad and he went home, she thought they were voting JD. Shan says that Brad had an advantage and he had to go. JD is upset that Shan knew about the advantage and didn’t tell him because he told her about his advantage and he thought they were close, now he feels played. JD asks Shan for his extra vote back. He says shame on him, she is not going to fool him twice.

It’s time for the first Reward Challenge. They are going to race out with a ball, toss it into an overhead track, and catch it on the other side. Once all four players are through, they are going to dig under a structure and one at a time try to land those balls on a perch. The first two tribes that finish first win rewards. The first tribe to finish will have a visitor back at a camp, an expert at living off the land in Fiji. The second tribe wins one beautiful fish to share.

The first part of the challenge is pretty easy, except for JD who trips and lands on his face. UA is in the lead with two balls on the perch. Heather is not giving up but she is keeping her team back. UA wins it for first place. YASA wins second place with LUVU losing because of Heather and she falls down on her knees and breaks down. Her team supports her, tells her she can’t win everything, they’ve got her back. Danny says she gave 100% effort, she didn’t let anyone down.

Back at camp, YASA team is cooking the fish and enjoying it. Tiffany calls the team, there are hundreds of baby turtles down on the beach.

UA day 8, the expert is showing them how to climb a tree to get coconuts. Then he shows him how to use the whole coconut. The tribe doesn’t feel discouraged in their surroundings anymore.

At LUVU, Erika says the challenge proved that their tribe is not unbeatable after Heather’s performance and she feels sorry for her. Sydney finds out that Erika said her name and she is surprised and upset.

Deshawn has this master plan to get rid of Erika and she has no idea. It makes sense to Danny but he doesn’t want to throw a challenge to do it, it goes against everything he is as an athlete.

Time for the Immunity Challenge. They will race through the water collecting three bags of logs along the way. They will then push those logs through a tunnel to release a key at the other end. They will use the key to release three rings and attempt to land those rings on a series of targets. The first two tribes to finish, win immunity.

It is UA and LUVU side by side with YASA in last place. Deshawn and Danny decide they are throwing the challenge, they’ve made the decision that it is important to send Erika home. Deshawn looks back in the water and LUVU is still in the water, he just doesn’t know what to do to go any slower so reties the knots to slow them down. Deshawn is doing everything he can to throw this challenge but they are in the lead. Naseer jumps in for his tribe and gets two rings tossed, then three. UA is going to Tribal Council, DeShawn and Danny failed at trying to through the challenge for LUVU.

At UA Shana tells JD that she wants him to leave his advantage at camp, or let her hold it, as a level of trust. Little does JD know that she is playing him. Now she is thinking what if she keeps the extra vote and votes out JD. She doesn’t want to be a villain, but she wants to be an assassin.

Time for Tribal Council, Genie says the last tribal she was blindsided as much as Brad, and she thinks it is going to be the three against her tonight. JD says that he hasn’t played the game that he thought he would play. Jeff asks Genie, it is her tonight, what is she going to miss, she says her tribe. Time to vote, Ricard is up first. Jeff tallies the votes, the first one is for Genie, then JD, JD, JD. JD asks if there was any particular reason, his tribe tells him that they love him and he rocks as he is walking out.