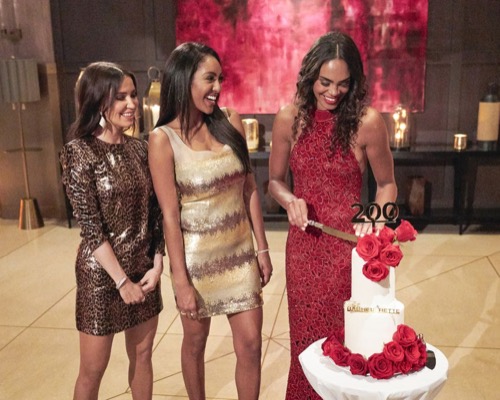 The Bachelorette airs on ABC this evening with an all-new Tuesday, November 23, 2021, episode, and we have your weekly The Bachelorette recap below. In tonight’s season 18 episode 6 as per the ABC synopsis, “With hometowns on the horizon, Michelle enlists the help of some incredibly tough critics to design and lead the dates this week– her own fifth grade students!

The men will have to be on their best behavior to impress these smart and savvy pre-teens who want the best for their beloved teacher, but one man stands out with flying colors for his fort building skills and is hand-picked for the coveted one-on-one date.

The kids’ instincts are sharp but, even with their help, Michelle still has to make her most difficult decisions as she chooses the men whose families she will meet. In fact, one of those decisions may change the course of one man’s life forever.”

Tonight’s The Bachelorette episode begins with Michelle, some of her children visit her. Her students say she is their favorite, because she is kind, patient and helpful. She says she feels lucky to have them there, they are going to help them this week. Michelle thinks the men are going to feel off guard. The four students go in to see the men, they tell them that they are taking over the week and planning the dates.

Kelsey says she is going to find out who the good guys are and who the bad guys are. Jayleen and Kelsey like Olu, they say he is kind hearted. Kelsey doesn’t really like Martin, she doesn’t know how to explain it, but he is a show off and he wears too much cologne. Ahmed likes Rodney, he is funny and a nice guy. Clayton builds a fort for the kids and wins them over.

The first date card, “we had a lot of fun today, Michelle asked us to pick our favorite for the date, we liked everyone but we liked one the best.” Michelle has never let a fifth grader plan a date for her, but she trusts her students, fifth graders are smart. Clayton is the winner, he tells Michelle that he won the kids over with fort building skills. Michelle picks up Clayton in a limo and they have pizza, candy and donuts.

Michelle and Clayton go to a museum, her students love it there and she can see why they planned it. They have the whole museum to themselves, there is nobody else there. Clayton is a lot of fun, he jokes around and is playful. Clayton is giving his all, if he is lucky enough to get the rose during this date, the next step is her meeting his family.

Clayton says that he has gotten so invested in his job that he has been single for so long. After a bit more chatting, Michelle picks up the rose and tells him that she really feels like she got to know him during this date, he checks all the boxes of qualities in who she is looking for. Handing out the rose means that she is ready to meet his family, and she doesn’t feel like she can get there in time.

It is not that he is not enough, it is about following her heart. He thanks her for the opportunity and for meeting him, he is sorry that he couldn’t be the one for her. She tells him that he is wonderful and amazing, it is just not the right fit right now. Michelle gets up and walks him out. Two of the students write letters to Clayton, they really liked him, and he reads them he is reduced to tears.

It is time for the group date, the kids planned a farm date. Rodney can’t tell a lie he has never milked a cow before, meanwhile, Rick is a natural and does very well at milking cows. Rodney is hilarious and Michelle is smiling. Martin looks like he didn’t want to even touch the udders. Joe is a clear winner for much milk he is able to get out of the cow. Michelle thinks one of the most attractive thinks about a man is them being nurturing. Next, the men have to churn butter and it is a real workout on the hands. Joe outperformed everyone at milking the cows, nurturing the calves and making butter. Next, it is time to clean up poop and Michelle says if they want kids they are going to have to clean up some kind of poop.

Time for the evening cocktail after the group date, Michelle tells the men that this was the last group date and the rose tonight means, she will be meeting their family. Nayte says he couldn’t be happier to have gone on this journey with Michelle. He tells her that they haven’t really touched too deep on family, he says he has never brought anyone to meet his dad – and then she came along. He feels that it would be so easy for her to meet his dad, and he wants her to know that he is definiltey, seriously falling for her. She says she feels really strongly for him, she is tumbling down a hill so fast for him. He tells her that she makes him happy.

Michelle sits down with Joe, he says what he loves about his family are traditions. Then one by one, Michelle spends time with the other men. She is starting to develop really strong feelings for all of them, it is getting hard. Early in this journey she made a promise to herself that she wouldn’t have a relationship without trust. Martin is getting worried, his last conversation with Michelle, he says there was misunderstanding. Olu says that Martin is the only guy that raises red flags to him, he thinks he can be two faced.

Martin tells Michelle that he would love to take her to his home town. She asks what his friends would say his downfall is, he says it is being brutally honest. There is going to be a group date rose at the end and Martin is hoping that it will be for him. Olu speaks to Michelle and tells her his concerns over Martin. When Michelle said that she was feeling unseen, Martin said that she hadn’t dealt with her past and it was immature. She thanks him, that piece of information is huge and going into this she would want to know. Michelle thinks Olu is very trustworthy and has no reason to be dishonest with her. And, she has been feeling uneasy with Martin lately.

Michelle calls Michelle for another talk, if she doesn’t have a conversation with him she won’t be able to sleep. She tells him that it has come to her attention that when they are having conversations he is saying one thing to her face and another when he is not in front of her. Martin says it is not true, definitely not. Martin keeps talking and not letting her talk. He says she is letting someone else dictate her feelings.

She asks him if he has been honest, he says yes. She says he hasn’t listened to what she is saying, and for that reason, she has to walk him out, she no longer trusts him. The part that is the most hurtful as that she opened up with Martin and he stomped on her and considered it to be a character flaw. Martin says he is not upset at going home, he is upset the way Michelle handled things. And at this point, he wouldn’t give her a shot, he feels sorry for her and she doesn’t deserve his time.

Michelle returns to the men and picks up the group date rose, she says she is giving it to someone who she feels confident in, Nayte. It was hard to say goodbye to Martin, but Michelle feels like her soul mate is still within the group of men.

Time for Brandon to have his one on one date with Michelle, he is so excited. First stop is for ice cream, a favorite spot of Michelle. Next she takes him to a place where she spends the most place, she doesn’t take anyone there, she takes him to the house where she grew up. Her parents are not there, she gives him a tour of the house. They are in her bedroom and he ask her if her parents are ok with a guy being in her room and they laugh. Next, they go in the hot tub and a dip in the pool. They are having a blast and Brandon says nothing can go wrong, until her parents arrive and find the two in the hot tub.

Brandon feels a little awkward, he borrowed her father’s swim trunks. Brandon and Michelle get changed and sit down with her parents for a chat. Michelle gets up and leaves them for a bit, Brandon asks her parents for their blessing if they move forward in their relationship.

Later that evening, the two are together and Brandon gives her a bracelet. Her heart is going a million miles an hour. Tonight she saw the vulnerable side, the family side – he makes her know that she is always on his mind. She picks up the rose and tells him that he continues to impress her, and she can see him being her best friend, she would love for him to accept the rose so she can meet his family. He accepts the rose. He told her that he was falling in love with her and that is the biggest risk you can take. She can tells how much of Brandon’s heart is in this, and it is very possible that she could fall in love with him.

It is time for the cocktail party, it is getting more real, there are only two roses to give out because Nayte and Brandon have one. Michelle shows up and says she has decided to cancel the cocktail party because she knows where her heart is at. She says tonight’s decision is one of the hardest decision that she has had to make. The first of two rose goes to Joe, the second and final rose goes to Rodney.

Rick and Olu are sent home.

Michelle tells Olu that he has been amazing throughout and one of the most sincere people he has ever met. Rick tells her it has been an amazing journey, he wishes her well. Rick prays that Michelle finds someone who will treat her right. Michelle is really excited about the four men who are moving forward, family is everything to her and she is really looking forward to seeing more of who they are.