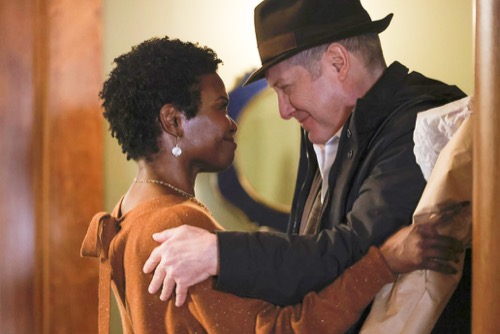 Tonight on NBC their hit drama The Blacklist starring James Spader airs with an all-new Friday, April 16, 2021, episode and we have your The Blacklist recap below. On tonight’s The Blacklist Season 8, Episode 13 called, “Anne”,  as per the NBC synopsis, “Red enjoys a quiet visit with a friend (guest star LaChanze) at her home in rural America.

In tonight’s episode of The Blacklist, the episode begins with Dembe and Red meeting his financial advisor, Kane. Once done, they catch a plane and Dembe tells Red that he is worried about Townsend. Red says he will be fine. Red tells him that he likes her, a candle burning in the window. Dembe says he should be with him. Red says he should be with Raymond Reddington and that is not who he is when he is with her.

Cottonwood Falls, Kansas Red arrives at Anne’s house, he brings flowers for Anne, her friends Bran and Lois are there. Lois asks him if his flight was delayed, he says yes. Lois tells him that Anne is very trusting, she is her best friend and wants her to be happy and if he messes this up, she is going to kill him.

While they are playing cards, Red asks Lois what it is like to be a police officer in a small town, he asks because he is a crime buff. She tells him that nothing goes on around town, it is pretty quiet, she has a gun, but she doubts she will ever use it. Bran asks how Red and Anne met each other, he tells them about the park. Later, Red and Anne watch Italian movies from the 60’s and he falls asleep on the couch, his head on her lap.

The next day, Red is trying to fix Anne’s turntable, he tells her that he is going to run down to the hardware store. She tells him to take her truck, he doesn’t want to waste gas in his rentals. In town, Red remembers Dembe’s words, “no patterns, it is the first rule staying ahead of the enemies.” Red sees a truck for Chase County Water & Power, he looks at it suspiciously and then goes into the hardware store.

Later, Red is having dinner with Anne, she asks him if he can’t stay past Monday. He says he is working on something for many years and it is at risk, he has to go. Outside his life is so complicated, and with her, it’s not. She says she wants to help him carry his burdens and she can’t do that unless he tells her. He asks her to dance while they dance to “Just Call Me Angel,” on the turntable. Then, the two share a passionate kiss.

The next morning, Red wakes up, Anne is already out of bed, he smiles. He heads downstairs and hears Anne talking to Lois who tells her that she knows nothing about him. Anne says she knows how he makes her feel and he has problems, but when he is with her the problems go away. Lois says she hasn’t met anyone from New York who hasn’t been pushy, rude, or a narcissist. Anne says she is invisible, but not to him, and she loves him for it. Red walks in and says the coffee smells delicious. Lois goes to work, Anne kisses Red good morning.

Red tells her that Lois is right, she knows nothing about him. Anne goes upstairs to get her binoculars and a blanket, Red makes sandwiches to take with them. Red looks out the window and he sees the same van that he noticed outside the hardware store and it doesn’t sit well with him. He sends Anne into town to get something, tells her he will finish everything up and be ready when she returns. Once Anne is gone, Red goes outside and sees a guy checking the wires. The go goes into his bag to get his work order, but he is really going to get his gun. Red pulls a knife on him, asks how many are coming, then slits his throat and takes his gun. Red goes around the front of the house and he sees the van, when the driver sees Red, he takes off.

Outside Anne’s house, two vehicles show up with Townsend and armed men. He goes inside, Red and Anne are not there. The phone rings, he picks it up and Red is on the phone, he says this has nothing to do with Anne, she doesn’t know who he is. Townsend doesn’t care, Red didn’t care about his family. Red is in town, he goes to the shop and finds Anne, she sees blood on his hand and he says he will explain in the car. All of a sudden, we see a woman get out of a black SUV, Red turns around with Anne, he dumps her cell phone in the garbage.

He sneaks into a store with Anne and tells her that he is not who she thinks he is, he has another life and that life found him here today, she is in danger. He says someone wants to hurt them. He puts her in a closet with a gun, he tells her to stay quiet and if anyone but him comes in, shoot them. Red is outside the closet, the woman from the SUV is in the store, looking around, she is about to open the door where Anne is and Red kills her while Anne is watching. Anne doesn’t want to go with Red, he tells her it is not safe and there are people who will kill her. Red brings Anne into the police station, he gives himself up and says there is a situation outside.

Red tells the officers that they need to get Lois somewhere safe now, they don’t have much time. They need to contact any available units from other counties to help out. Red says that dangerous, highly trained mercenaries are coming. Anne tells Lois that he is not kidding, she saw him kill a woman. Red tells Lois that he is the most wanted man, but she needs to get Anne safe, these men don’t care and will kill everyone in the station. Red keeps begging them and the officers are really not taking it seriously. Meanwhile, Townsend is still in Anne’s house.

Finally, the chief spoke to the county and they are sending in more people. Anne asks Red how he could do this, how selfish, he says he is so sorry. Anne slaps him across the face and says when this is over, so are they. The officers see that there is now three SUVs outside, Townsend is in one of them. Townsend calls the chief, he says he is there for Reddington and he knows that the additional units are nine minutes out, he has eight minutes to kill everyone. One officer shouts to the chief and tells him they are heavily armed outside. The chief says he is not going to bend to his demands. All of a sudden, the chief gets shot in the head. Townsend says he hopes the second in command can be more reasonable.

Red tells Lois to uncuff him and let him go, she does. He tells her to arm Anne as well. All of a sudden, Red and the others start shooting outside. Townsend gets out of his car, he believes he has the upper hand and is winning this shootout. Lois got shot, Red takes her back, he and Anne are following and they all get into a cell. Townsend arrives and sees the three of them. They have locked themselves inside, but Townsend is unscrewing the door and tells Red they are ending this today. R

ed tells him to take his man and go. Sirens can be heard, Townsend turns around to leave with his men. Lois pulls a gun on Red, Anne tells her no. Anne leaves with red, at her house, he tells her that he was selfish to have a relationship with her. He kisses her and hugs her. He thanks her, for everything, every minute. He kisses her one last time.

Red turns back, he goes to Anne’s house and sees her there and someone has a gun to her head, Red says, “Elizabeth.”