The Bold and the Beautiful Spoilers: Finn Lies to Steffy, Bonds with Sheila Behind Wife’s Back 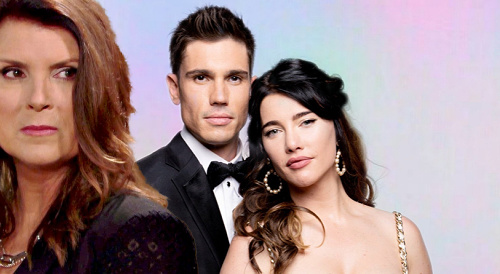 The Bold and the Beautiful (B&B) spoilers tease that John “Finn” Finnegan (Tanner Novlan) will lie to Steffy Forrester (Jacqueline MacInnes Wood) and apparently bond with Sheila Carter (Kimberlin Brown) behind his wife’s back. This secret should hit Finn and Steffy’s relationship hard, so let’s talk about what’s in store.

The news that Sheila is Finn’s biological mother will lead to Steffy spilling plenty of horrible stories.

Steffy will want Finn to understand how much of a psychopath Sheila has proven to be, so Finn will indeed hear some awful things he doesn’t want to hear.

It’ll be tough for Finn to find out the birth mom he wants to connect with has such a terrible history with the Forrester family.

One of Finn’s top priorities is making Steffy happy, so it’s easy to see why he’d hide his relationship with Sheila.

Finn needs answers about where he comes from and wants to fill a certain void in his heart, but he won’t want to rock the boat with Steffy too much.

During the week of August 16-20, Finn will indeed keep a secret under wraps.

There’s something Finn won’t tell Steffy, so that probably means he’ll secretly meet with Sheila and could perhaps continue to do so without Steffy’s knowledge.

Finn might view this as a way to get the answers he’s seeking and find some happiness for himself – all while Steffy’s none the wiser.

However, Steffy could sense that Finn is being secretive or at least distant. There’s bound to be a shift once Finn isn’t the completely honest man he was before.

Steffy and Finn are very in tune with each other, so the difference should be noticeable once Finn starts lying to Steffy’s face and sneaking around for Sheila visits.

Once Finn’s secret is ultimately revealed, Steffy should be hurt in more ways than one.

Finn will be going against her wishes by bonding with Sheila and lying to her about it, so Steffy may blow up at her husband.

This new marriage will be under serious pressure thanks to Sheila and all the stress she’ll create. We’ll pass along updates as other B&B details emerge.

The Bold and the Beautiful spoilers say Finn’s secret will cause trouble and could spark some shouting matches with Steffy, so keep watching!

CDL’s where you want to be for scorching Bold and the Beautiful spoilers, news and updates, so make us your B&B hotspot.