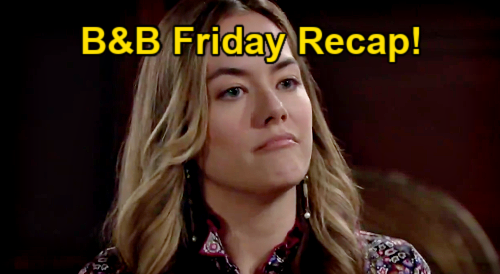 The Bold and the Beautiful spoilers recap for Friday, January 15, reveal that Hope Spencer (Annika Noelle) and Steffy Forrester (Jacqueline MacInnes Wood) continued their tense discussion in the Forrester CEO office. Steffy launched into an excuse about how she wasn’t trying to steal Liam Spencer (Scott Clifton) from Hope, but Hope wasn’t having it.

Steffy said that the baby had to be John “Finn” Finnegan’s (Tanner Novlan), and Hope demanded to know how Steffy ended up in bed with Liam. “You let him start drinking – how many times did you refill his drink?” Hope fumed.

Steffy said that she urged Liam to go home and get the truth from Hope, but Hope didn’t buy it, saying that once again, Steffy sabotaged her marriage to Liam.

Hope then called Steffy a home wrecker. “But your home isn’t wrecked,” Steffy argued. “Liam wants to be with you.” Hope blasted Steffy for cheating on Finn and for wanting Liam. Steffy said that she couldn’t lose Finn now, and that they shouldn’t let all the work they did to move past their problems fall away.

Hope barreled on, wondering what kind of woman gets herself in this type of situation, calling Steffy a liar, desperate, and selfish. Steffy said that this wasn’t true, but Hope said that Steffy could have prevented what happened that night, and she asked Steffy point blank who she thought the father was – Finn or Liam.

Meanwhile, at the cliff house, Finn bellowed accusations at Liam, saying that Liam had run right to Steffy that night because that’s who Liam is. “You have no integrity, no principles, you cheat on your wife when your ego is wounded. It’s pathetic,” Finn fumed. “Steffy’s pregnant – you could be the father!”

Liam tried to characterize that night as an error in judgment and “just one night,” and he even tried to say that he wasn’t cheating on Hope. “I thought Hope had betrayed me,” Liam insisted. Finn pointed to the picture on the wall. “That’s how you did it, right there, that damn picture,” Finn seethed.

“You knew Steffy was vulnerable to you – never mind all the work she’s done to break that cycle. You knew exactly what you were doing that night.

You’ve been doing it to Hope and Steffy for years!” Finn continued, saying that the constant back and forth that Liam did was sick, and that Thomas Forrester (Matthew Atkinson) had warned him about this.

“It stops now, you hear me?” Finn said menacingly. “If I’m the father of this child, you are going to have a very different relationship with Steffy in the future.” Liam lamely said that he and Steffy already had a child, but Finn continued, saying that Steffy would not be Liam’s fallback anymore.

“I’ve put up with you coming in here and making yourself at home in the home you abandoned,” Finn barked. “You’re done playing games. I’m not going to keep you from your daughter, but those days,” Finn said, pointing at the picture on the wall, “are over.”

In the backstage area at Forrester Creations, Zende Forrester Dominguez (Delon de Metz) and Zoe Buckingham (Kiara Barnes) worked and talked. Zoe got a little flirty, and Zende jokingly called her out on the flirting.

Zoe then disclosed that Carter Walton (Lawrence Saint-Victor) wants to set a wedding date, but that she has been thinking a lot about Zende.

Zoe went on, saying that she felt an immediate spark with Zende when they first met, and she wondered if Zende felt it too. Zende didn’t deny it, but he was clear that Zoe was engaged to Carter, and that he was friends with Carter.

Zende disclosed that earlier, Paris Buckingham (Diamond White) had kissed him, but Zoe said she didn’t care about that.

Zoe barreled on, saying that she cared about Zende, and that perhaps the feelings were just bad timing. “What if we’re meant to be together?” Zoe said. “I don’t know what to tell you. That’s a line I cannot cross,” Zende insisted. “Carter doesn’t deserve that, and neither do you. It’s not going to happen.”

That was a great episode of B&B, and there’s much more coming next week! Stay tuned to the CBS soap and don’t forget to check CDL regularly for the latest Bold and the Beautiful spoilers, daily episode recaps, and news.