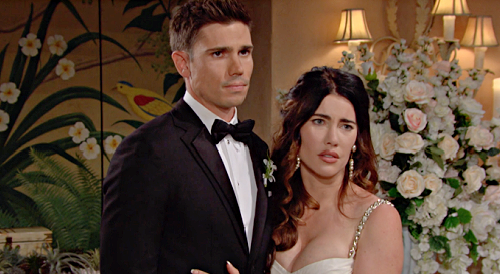 The Bold and the Beautiful spoilers reveal that John “Finn” Finnegan (Tanner Novlan) will keep a huge secret from his wife. Despite everything Sheila Carter (Kimberlin Brown) has done and Steffy Forrester’s (Jacqueline MacInnes Wood) warning, Finn will keep in contact with his alleged birth mother. The actors discussed the storyline and if “SINN” will survive.

B&B spoilers reveal that Sheila claims to be Finn’s birth mother. Jack Finnegan (Ted King) claims that what Sheila says is true as she contacted him many years ago. However, the only real way he would know for sure is if he fathered that child. In any case, Sheila is a threat and Steffy is reeling over the discovery.

Things aren’t going to get any better right away, though. Finn has already opened the door by responding back to Sheila’s text message. Not only did he respond, but he also sent Sheila a heart emoji. Now she thinks Finn loves his birth mama and she’s not going to let go.

Speaking to Soap Opera Digest, Wood explained what she loves about this storyline twist. The actress noted that Sheila being Finn’s birth mother doesn’t just affect Finn and Steffy. The storyline will have an impact on pretty much everyone in both the Forrester and Finnegan families.

Then, others will be woven into the story by extension, such as Carter Walton (Lawrence Saint-Victor) getting a restraining order. Another example is Paris Buckingham (Diamond White) keeping Finn’s secret.

Big Trouble Ahead For ‘SINN’

The Bold and the Beautiful spoilers reveal that Wood teases what is coming up for Finn and Steffy. The actress explained that there are going to be “some big problems ahead.”

Fans already know that one of them is Finn responding to Sheila’s text message. Sheila was about to leave town until he did that. Finn will continue secretly communicating with Sheila, something that Paris finds out but promises to keep from Steffy.

The Bold And The Beautiful Spoilers: Couple’s Fate

When talking about Finn and Steffy’s fate, Novlan spoke up and believes that the couple might be able to get through this.

“It’s going to be tumultuous. They are going to have to navigate this. It will be stressful. I always hope that they survive – but it’s always good to have that drama in a soap because if you’re happy for too long, usually you’re in trouble. But I believe 100 percent that you can get through anything together if you work through it, and that’s the name of the game we’re in. I always believe they will make it through.”