The Bold and the Beautiful Spoilers: Li’s Huge Lie – See Who Adoptive Mom’s Hiding From Finn? 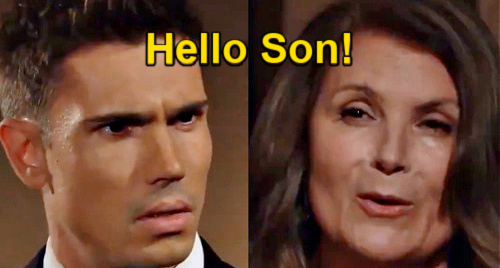 The Bold and the Beautiful spoilers reveal that John “Finn” Finnegan (Tanner Novlan) practically worships his mom. Finn and Li Finnegan (Naomi Matsuda) are extremely close. However, she seems too perfect. With her swearing that she’d never lie to Finn, that’s soap code for “I’m lying through my teeth.” So, what is she hiding and how will the truth impact the characters?

B&B spoilers reveal that we met Li earlier this week and she seems lovely. She is beautiful, friendly, supportive, understanding and is an extremely successful surgeon.

Despite her busy schedule, Li always made time for Finn. She isn’t just his adoptive mom, but is also his friend, confidante, role model and mentor. Soap fans know that the most perfect characters are the ones with the darkest and dirtiest secrets.

Finn isn’t close to a lot of people. Since meeting him, the only people we have seen him really bond with is Steffy Forrester (Jacqueline MacInnes Wood). There’s nothing wrong with someone keeping their circle small.

However, it means that there is probably one person that he trusts with his life. Someone that he thinks is of high moral character and would only do what’s in his best interest. That person is Li, which means she is the one that will deceive or betray Finn.

The Bold and the Beautiful spoilers reveal that ever since Jack Finnegan (Ted King) made his debut, he has seemed a bit sketchy. He definitely has some noticeable facial expressions that make fans wonder what he’s guilty of and what he’s hiding.

It might be true that he’s hiding something, but it’s likely he’s just the fall guy. The one who shoulders the responsibility to protect Li and Finn. The one that goes to extremes in order to keep the secret hidden. After all, Li has a professional image to protect.

The Bold and the Beautiful Spoilers: Good Intentions, Bad Decision

The secret must have something to do with Finn’s adoption, which we aren’t sure is legitimate. By the time she wanted a baby of her own, it was too late. Remember, the Forresters are involved somehow as Jack said he “knows of the family” and it didn’t sound like he was talking about fashion.

We also know Sheila Carter (Kimberlin Brown) is Finn’s real mom and for years, she was after Eric Forrester (John McCook).

We are thinking this is all connected. We don’t think Eric did anything malicious. He probably thought he was doing the right thing for an innocent child or perhaps someone else stepped in to protect Eric.

It would also explain why someone got an alert on the “SINN” wedding announcement, suggesting that someone has been tracking Finn for years… such as a mother who had her baby stolen from her.