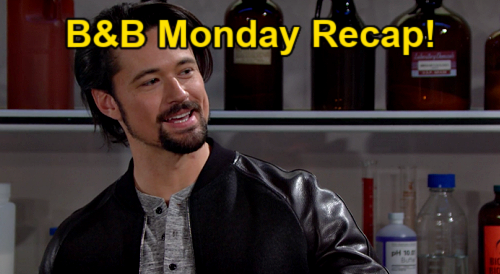 Thomas asked how Steffy was doing, and she said she was trying not to feel guilty but that it got overwhelming sometimes. Thomas flashed back to when he asked Vinny Walker (Joe LoCicero) about whether he tampered with the paternity test.

“Do you ever think about getting another test?” Thomas asked Steffy. Steffy said no, and that the test wasn’t open for interpretation.

Thomas winced, and then Ridge Forrester (Thorsten Kaye) walked in wondering if Carter Walton (Lawrence Saint-Victor) or Zoe Buckingham (Kiara Barnes) were around. Thomas left hurriedly, saying that he had to go talk with someone.

Over at Carter’s loft, Zoe begged Carter for one more chance, but Carter said matter-of-factly that he didn’t trust Zoe anymore. Carter said that Zoe had been saying all the right things and that she seemed sincere, but that he just couldn’t believe her.

Zoe cried, saying that she wanted to marry Carter and stand by him forever. “I know that you love me,” Zoe said earnestly.

“It’s over!” Carter bellowed as Zoe continued to protest. “I can’t trust you the way a man is supposed to trust his wife!”

Carter told Zoe to keep the ring, but to take it off so there was no confusion. Zoe sadly took off the ring and put it on a nearby table. “I may not deserve it right now,” Zoe said, “but someday I will earn your trust back – I promise you that.” And with that Zoe left the loft.

Paris said that she had a wonderful time with Zende tonight and that she didn’t know how to thank Zende. Zende suggested that Paris do two things: (1) let him learn more about her work, and (2) sing for him.

Paris obliged, and she sang a song that she wrote for Zende. Zende beamed and applauded afterwards, telling Paris that she was very talented. Soon, it was time for Zende and Paris to head back to work, and Zende thanked Paris for a wonderful time.

Back in the Forrester Creations CEO office, Ridge was sketching when Zoe came in and told him that Carter had called off their engagement. “You’re probably happy about this,” Zoe said. Ridge retorted that he’s not happy about Carter getting his heart broken.

Zoe asked Ridge to talk with Carter, but Ridge said, “Zoe, you messed up – deal with the consequences.”

A short time later, Steffy returned to the CEO office where she spoke with Ridge. Ridge smiled and said that pregnancy looked wonderful on Steffy. Steffy sighed and sat down, saying that it was another baby…with Liam Spencer (Scott Clifton).

In the Forrester Creations design office, Zoe entered as Paris was working. “He did it – He called off our engagement!” Zoe fumed to Paris. “And it’s all because of you!” Zoe went onto say that Carter didn’t trust her. “And you’re blaming me?” Paris asked incredulously.

Zoe then started ranting at Paris, saying that Paris always screws everything up. Paris fired back that Zoe always thinks that everything is about her, and that she has been living her own life.

Zoe yelled, “No, you’ve been trying to live mine!” Zoe ranted about how Paris was working at Forrester Creations and she fumed that she wanted Paris gone – today.

Over in the hospital lab, Thomas walked in to find Vinny hard at work. Thomas made a little small talk and even picked up a beaker, nearly sending Vinny into a tizzy.

Thomas brought up Steffy and how she had been so sure that her baby’s father was John “Finn” Finnegan (Tanner Novlan).

“But you proved her wrong,” Thomas mused. Vinny insisted that science proved Steffy wrong, not him. Thomas said that he really wanted to believe Vinny, and that he thought that Vinny changed Steffy’s test results in a misguided attempt to help.

“Log onto the computer – prove to me that you’re saying the truth,” Thomas said.

Vinny flatly refused, citing patient confidentiality concerns. Thomas wondered why Vinny was being so defensive, and he demanded that Vinny show him the results.

“Show me – I need to know that you didn’t make it so that Liam is the father of Steffy’s child,” Thomas insisted. “Show me now!”

That was a terrific episode of B&B, and there’s plenty more action coming tomorrow, so stay tuned! Here at CDL, we’ll keep you up to speed on all the latest Bold and the Beautiful spoilers news, and updates.