The Bold and the Beautiful Spoilers: Steffy Needs To Have Finn’s Baby – Deserves Happy, Carefree Pregnancy 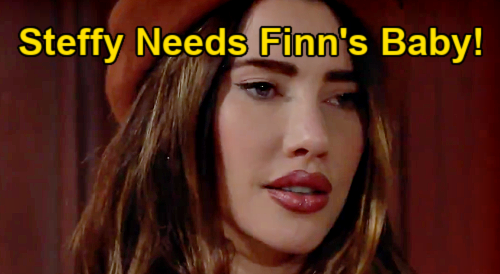 The Bold and the Beautiful (B&B) spoilers tease that Steffy Forrester (Jacqueline MacInnes Wood) will soon be back in a familiar place – her doctor’s office requesting a paternity test.

As B&B viewers will remember, Steffy had a paternity test when she was pregnant with Kelly Spencer (Colette and Avalon Gray) because either Liam Spencer (Scott Clifton) or Bill Spencer (Don Diamont) was the father.

And once Liam accidentally found out about that paternity test, he hit the roof, and that was the end of Steffy and Liam’s happy marriage. Liam walked out on Steffy because he was incensed that Steffy had slept with Bill, and the remainder of Steffy’s pregnancy wasn’t what one would call a happy experience.

Sure, there was joy because of the new life that Steffy was carrying, but there was also a lot of angst during that time.

Well, this time around, a lot of fans are really hoping that Steffy’s pregnancy can be more drama free. Of course, there’s already been plenty of drama since the baby’s paternity is once again in question due to Steffy and Liam’s affair.

But a quick paternity test could be done, and Steffy could get some great news – that John “Finn” Finnegan (Tanner Novlan) is the father.

If that were the case, then Steffy would have a chance at having the remainder of her pregnancy be relatively stress-free. Steffy and Finn could spend the rest of the pregnancy recommitting to each other and working out the trust issues that will surely follow Steffy’s cheating with Liam.

The hope would be that by the time the baby is born, Steffy and Finn would be solid, happy, and ready for their new little bundle of joy.

On the other hand, if the baby is Liam’s, then Steffy is probably going to have nine months of angst again. Steffy will have to juggle her relationship with Finn alongside Liam coming to every OB appointment, and it would just be a big mess.

Finn might even decide not to stick around, and that would leave Steffy alone dealing with a pregnancy while Liam tries to work things out with Hope Spencer (Annika Noelle).

For all these reasons, we’ve seen a lot of fans on social media saying that Steffy’s baby just HAS to be Finn’s. It certainly seems to be the direction that a lot of fans would like for the storyline to take, but that doesn’t mean that’s how it’s going to go by any means.

Still, we have a feeling that there are a lot of fans out there with fingers crossed hoping that Steffy will find out that the baby is Finns and will have a low-key and happy pregnancy.

Do you think that Steffy and Finn will be the parents of the baby? Stay tuned to B&B and we’ll be sure to keep you up to speed on all the latest Bold and the Beautiful spoilers, updates, and news. Here at CDL, we’ve got you covered!