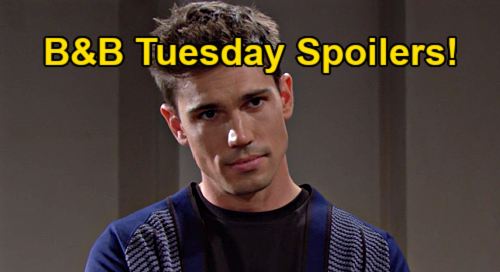 The Bold and the Beautiful spoilers for Tuesday, February 2, tease that Ridge Forrester (Thorsten Kaye) will have an unenviable job ahead of him. As B&B viewer know, Ridge has just told Carter Walton (Lawrence Saint-Victor) that he walked in on Zoe Buckingham (Kiara Barnes) making a move on Zende Forrester Dominguez (Delon de Metz).

According to B&B spoilers, Carter is going to be utterly shocked by this news. Of course, Carter will probably deny the whole thing at first, insisting that Ridge must have misunderstood what he walked in on.

But Ridge will be determined to make Carter see the truth about his fiancé, and he’ll go on to explain exactly what he saw and heard at the Forrester mansion the evening before.

Well, from here, it looks like Carter will ultimately accept what Ridge is saying. Carter knows deep down that Ridge only has his best interests at heart, and he knows that Ridge wouldn’t deliberately lie to him about something this serious.

Carter will remain in the CEO office in shock, waiting for Zoe to come back so he can confront her about Ridge’s allegations.

As B&B viewers know, Steffy and Finn have just showed up at Dr. Campbell’s (Tina Huang) office for the paternity test, and Steffy is adamant that this baby just has to be Finn’s.

As Dr. Campbell explained, the test will be conducted using the latest technology, and it will be a Yes/No type of test. That is, Steffy and Finn will get a result indicating that Finn is or is not the father of the baby.

Look for nerves to be high while Steffy gets her blood test and Finn gets a cheek swab so that the test can proceed.

Finally, it appears that Hope Spencer (Annika Noelle) and Liam Spencer’s (Scott Clifton) conversation over at the cliff house will continue. Liam has just come home and has been rehashing all of his feelings and promises to Hope about how much he loves her and wants a family with her and no one else.

However, it seems clearer now that virtually everything is riding on the paternity test for Hope. If Liam turns out to be the father of Steffy’s baby, then it appears that Hope is going to have a really difficult time maintaining her marriage to Liam.

Of course, Liam thinks that either way, the marriage will survive, but it seems that Hope has other ideas about that.

Tuesday’s episode is going to be terrific, so be sure to tune in! We’ll keep you informed about all the latest B&B updates as more news comes in. Keep checking back with CDL for all the latest Bold and the Beautiful spoilers, daily episode recaps, and news.