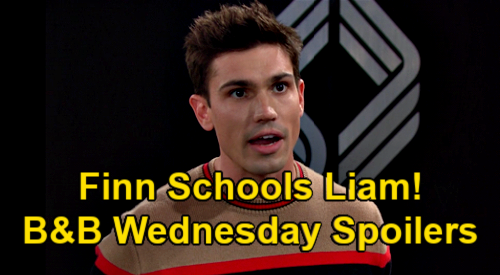 The Bold and the Beautiful spoilers for Wednesday, February 24, tease that John “Finn” Finnegan (Tanner Novlan) will continue his tense conversation with Liam Spencer (Scott Clifton).

As B&B viewers know, Finn has showed up at Spencer Publications, where he’s in the middle of berating Liam for all the hurt and chaos that Liam caused for Steffy Forrester (Jacqueline MacInnes Wood) and Hope Spencer (Annika Noelle).

Well, according to B&B spoilers, Finn will take the opportunity to unleash a bunch of new rules for Liam with respect to how he’s going to deal with Steffy going forward.

Finn will school Liam on the new boundaries that he’s going to have to respect when it comes to how they’re all going to interact with each other going forward.

Bottom line: Liam and Steffy’s communications are going to be limited to discussions directly related to Kelly Spencer (Colette and Avalon Gray) and the new baby.

It looks like Finn will make it clear to Liam that there’s going to be no more running to Steffy when he’s having problems with Hope – those days will be over.

Meanwhile, Thomas Forrester (Matthew Atkinson) will continue to reel from the possibility that his buddy Vinny Walker (Joe LoCicero) may have done something to alter the paternity test results that were conducted between Steffy and Finn.

As B&B viewers know, Thomas came to the realization that Vinny might have had access to the lab where the test was run, and he’s really hoping that Vinny didn’t do something unthinkable.

B&B spoilers indicate that Thomas will continue to ruminate about Vinny’s possible test tampering, while at the same time he becomes concerned for Steffy and the situation that she’s in.

It appears that Thomas and Steffy will interact on Wednesday’s episode, and Steffy may lament about how much she wanted the baby to be Finn’s.

It looks like Thomas will become worried about his sister, and he may come to the realization that the truth needs to come out.

We might see Thomas become determined to get to the bottom of what Vinny might have done – hopefully, Thomas will go this route rather than conspire to hide the truth in order to have a chance with Hope!

Wednesday’s episode is going to be fantastic, so be sure to tune in! And catch up with all your soap updates and spoilers here at CDL. We’ve got the latest Bold and the Beautiful updates just for you.