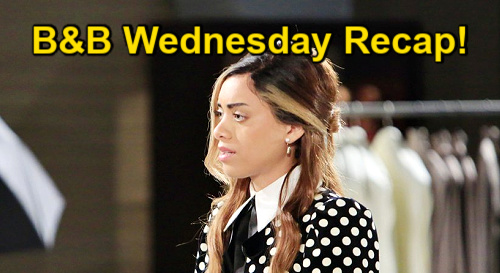 The Bold and the Beautiful spoilers recap for Wednesday, January 13, reveal that Hope Spencer (Annika Noelle) warily asked Liam Spencer (Scott Clifton) what he was trying to tell her.

Liam stalled, and Hope eventually said that they needed to try to put that night behind them. Liam said that might not be possible. Hope asked what was going on.

Eventually, after a bit more stalling and rambling, Liam told Hope that Steffy Forrester (Jacqueline MacInnes Wood) was pregnant. Hope immediately broke down and started crying, as Liam explained that this was what Steffy wanted to talk with him about earlier.

Hope then realized that this was why Liam confessed the truth about the affair.

Hope reeled, saying that this was too much, and that Steffy would have to take a paternity test. Hope ranted that one moment of weakness changes everything, and Liam begged Hope not to give up on them.

Hope promptly pointed out that Liam is the one who betrayed their vows, and that Kelly Spencer (Colette and Avalon Gray) could have a little brother or sister soon.

Hope sobbed. “How do we move on from this? We were so close!” Hope cried. “You know how much I love you – you threw it all away because you forgot who I was, and you turned to Steffy,” Hope lamented. “How do we move past this if you’re that baby’s father?”

Meanwhile, at the cliff house, John “Finn” Finnegan (Tanner Novlan) told Steffy that he was upset that the affair happened, and that he never thought this would happen.

When Steffy asked if Finn could forgive her, Finn said he wasn’t ready yet, but that forgiveness was the goal. “What we have is worth fighting for,” Finn said.

Finn continued, saying that Steffy could have kept the secret, but she came to him with the truth. Steffy looked miserable and said that there was something else that Finn needed to know. Steffy started crying, saying that she found out something today, and then she started rambling.

Finally, Steffy blurted out that she was pregnant. Finn was stunned, and he wondered how long Steffy had known. Steffy said that she took a test earlier today, and Finn smiled, clearly happy about possibly being a father.

But Finn then noted that the baby could be Liam’s, and he said that Steffy needed a paternity test.

Finn wondered if Liam knew, and Steffy said yes, that he was at the house earlier. Steffy said that she was willing to do whatever it takes to prove that Finn can trust her, and she gushed that they could be having a baby together. Finn looked upset still, but he was clearly hopeful that the baby was his.

At Forrester Creations, Zoe Buckingham (Kiara Barnes) fumed at Paris Buckingham (Diamond White) in the backstage area. Paris didn’t understand how taking a positive step in her love life had any impact on Zoe whatsoever.

“I’m trying to protect you,” Zoe said, noting that Zende Forrester Dominguez (Delon de Metz) was coming off a divorce.

Paris wondered what was really going on here, since Zoe was acting like she was jealous. Zoe said that she was happy with Carter Walton (Lawrence Saint-Victor), and she mentioned that Carter had a great job as COO of Forrester Creations.

Paris wondered why Zoe always brought up Carter’s title, and it she was only interested in Carter for his money.

Zoe flatly denied that, and she blasted Paris for trying to land Zende. “It’s not like that,” Paris insisted. Zoe said that it was time for Paris to turn down the job offer, forget about Zende, and go somewhere else. “No,” Paris said. “I’m taking it, and you need to learn to accept it.” Zoe looked stunned.

There’s a lot of B&B drama heating up, so stay tuned! Stick with the CBS soap and don’t forget to check CDL as often as you can for the latest Bold and the Beautiful spoilers, daily episode recaps, and news.