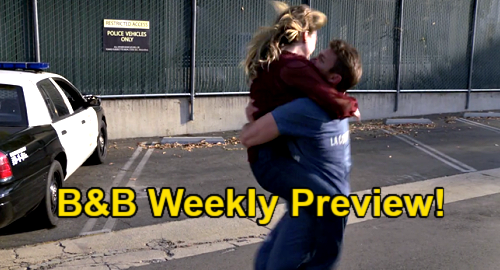 The Bold and the Beautiful spoilers preview for the week of July 12 to July 16 reveals that justice will prevail. Hope Logan Spencer’s (Annika Noelle) family has been torn apart by Liam Spencer’s arrest. Charged with the murder of Vincent “Vinny” Walker (Joe LoCicero), the truth will finally come out. The weekly preview shows the moment Liam and Hope are reunited.

B&B spoilers reveal that in the past, Thomas Forrester (Matthew Atkinson) would intentionally create situations bringing him closer to Hope. If he were still obsessed with Hope, then he would have taken full advantage of Liam’s arrest.

However, Thomas really has proven he is a changed man. Although he can’t move on with another woman yet due to his love for Hope, Thomas actually did the right thing.

It is because of Thomas telling Hope about Vinny’s suicide video that Liam even has a chance of getting released.

This week, July 12-16, the Vinny murder mystery storyline is going to start wrapping up. When Thomas and Hope get to the police station, they explain that Liam is innocent.

There are only two problems with the quest to free Liam. The first is the inmate is being transferred as they speak. The second is they don’t have the phone showing the proof that Liam is innocent.

The Bold and the Beautiful spoilers reveal that Hope looks out the window and sees the guards loading Liam into the prison van. She knows they can get the phone to Baker, but they need a little bit of time.

This prompts Hope to come up with a distraction to buy them a little time. It turns out that it works and Baker gets the phone. He can see for himself that Liam really is innocent.

In the weekly preview, Hope races outside and Liam steps out of the prison van. As he learns that he isn’t being transferred, but released, “Lope” runs toward each other.

Hope literally leaps into Liam’s arms, wrapping her legs around his waist.

The Bold And The Beautiful Spoilers: ‘Lope’ Reunited

Hope has been praying for this nightmare to be over and for Liam to come home. She wanted her fractured family back together. Now, her wish is finally coming true. We can see in the clip that Liam is back home with Hope.

As the two hold each other close, they can’t help but be thankful that the truth was revealed. As this chapter closes, the couple will be able to get back to their normal lives.

However, since this is a soap, there will always be obstacles and drama. What will be the next person or event that threatens to tear Hope and Liam apart?

Be sure to catch up on everything happening with CBS’ B&B right now. Come back often for The Bold and the Beautiful spoilers, news and updates.

It’s a homecoming you won’t want to miss! 💙 #BoldandBeautiful is new this week. Watch the latest The Bold and the Beautiful episodes for free on @CBS or subscribe for more on @paramountplus! pic.twitter.com/PWDVC9D1ns