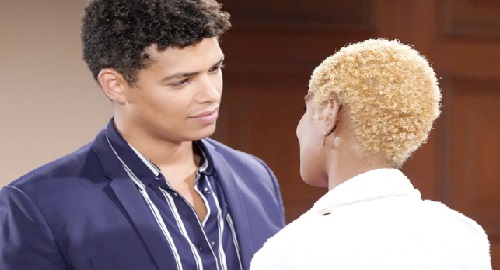 B&B fans know Zende has become increasingly convinced that Paris is a one-of-a-kind woman and the only person he wants to be with. Zende can’t imagine his life without Paris in it, so he’s already preparing to lock in a future with her.

Now that Zende has recruited Quinn Forrester (Rena Sofer) to help with crafting the perfect engagement ring, it won’t be long until Zende’s ready to create the perfect evening to go with it. Zende is a guy who knows how to turn on the charm and rev up the romance, so he’ll no doubt plan some sweet setup – perhaps with rose petals and a gourmet meal.

Paris should be surprised by Zende’s upcoming efforts, especially once it’s time to get down on one knee and ask her to be his wife. Of course, Paris will have to make some big decisions about what she wants the rest of her life to look like.

Realistically, viewers understand that pretty much no soap marriage lasts forever, but the characters don’t know that! Paris will have to mull over whether her feelings for Zende run deep enough to marry him or if she’s even ready to settle down.

Perhaps Paris will have more things she wants to accomplish in her career before she takes that huge step with Zende. Then again, B&B characters do have a way of diving headfirst into marriage without the proper buildup, so maybe Paris will be on board with the idea of a speedy engagement.

The main problem may be that Paris won’t want to accept this proposal without being totally honest. It’s not a good idea to enter a marriage with secrets hanging over like a dark cloud – just waiting to rain on your parade later!

With that in mind, Paris might decide she has to confess something before she moves forward with Zende. Paris may come clean about Thomas making his move and trying to steal her away. She might feel like ratting Thomas out is necessary if she’s going to have the kind of trust she wants in this potential marriage.

That could certainly rile Zende up and leave him ready to confront his cousin, so we’ll see how things play out in the aftermath of his imminent marriage proposal. We’ll offer updates as other news comes in.