The Bold and the Beautiful Spoilers: Zoe Knows Something About Paris That She’s Not Telling – Deep Secret Revealed? 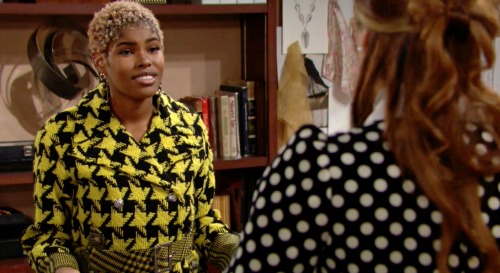 The Bold and the Beautiful spoilers tease that Zoe Buckingham (Kiara Barnes) is totally opposed to her little sister even living in Los Angeles, California, let alone working at Forrester Creations. But is Barnes’ character simply reliving childhood rivalries, or does she know something that everyone else does not?

Reese Buckingham (Wayne Brady) is in prison because he stole Beth Spencer (Madeline Valdez and River Davidson) from Hope Spencer (Annika Noelle) and Liam Spencer (Scott Clifton) at birth and then sold her to Taylor Hayes (Hunter Tylo) under the ruse of a private adoption.

Just as Zoe had her off-beat period in the past, might Paris Buckingham (Diamond White) have misdeeds that she’s hiding?

Bold And The Beautiful Spoilers – Paris Buckingham Is A Sweet Person

B&B has done a lot to present this new character, Paris, as a sweet young lady. She’s pleasant, warm-hearted, wants to help people, is idealistic, and fun-loving.

Now, Zoe is coming off as a self-absorbed jerk who wants to push Paris out of LA so that she can keep open lines with two guys, one of whom is growing interested in White’s character. Zende Forrester Dominguez (Delon de Metz) feels the mutual attraction to Zoe, but he knows that she’s engaged to Carter Walton (Lawrence Saint-Victor). So, Zende is moving on.

It appears as though Zoe doesn’t want Zende to couple with Paris and that’s why she’s behaving badly toward her sister.

Possibly, Zoe’s reaction is purely a replay of childhood events. She told Paris that the current scenario was just like when they were kids. That apparently meant that Zoe didn’t like Paris copying what she did back then.

But when considering the engagement that Zoe just impulsively entered into, it’s more plausible to conclude that Barnes’ character isn’t tapping into childhood experiences. As Paris said, they likely wouldn’t see all that much of each other if she worked for the foundation at FC.

Bold And The Beautiful Spoilers – A Deeper Secret Revealed?

Assume for a moment that there are negative elements in Paris’ past. If so, then Zoe would know that Paris would be a needlessly risky gamble, as was strongly stated to Carter. Of course, revealing whatever might be in Paris’ past could also make Zoe look bad.

However, if, like Reese, there is something criminal, in play, then Zoe’s fears are justified. But if not, then she’s being extremely petty.