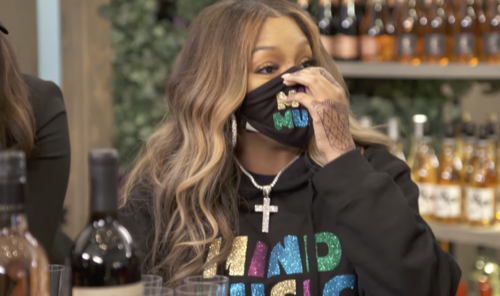 In tonight’s episode of RHOA, all of the ladies are at Kandi’s new restaurant except LaToya who is sick. Things are unclear because of Marlo, Kenya, and Porsha’s recent fighting. Marlo apologizes to them. Porsha just wants to be left alone. They all eat. Kenya asks Kandi to talk. She tells her how Marc has arrived in town and she doesn’t know where he is staying. He is early. Their daughter’s party isn’t until tomorrow. Kenya cries. She hasn’t filed for divorce and is still holding on. Kandi tells her to go home and deal with her stuff.

Kandi returns to the table. Several seafood dishes are served. Everyone loves the food. Kandi is happy. Marlo talks about how she made an ass out of herself on their trip. Shamea brings up how she heard Marlo got lips before the trip. Marlo laughs. She and Porsha go back and forth about the Bolo issue and their friendship. They celebrate Kandi’s mom’s birthday. Kandi thanks them all for coming.

Kenya has a zoom call with her doctor to reduce her breast size while Cynthia and her husband step on their scale. They are both upset about their weight. Drew and her husband rehabs her foot with some exercises. She tells her husband she doesn’t want their baby blessed by a friend who is a prophet to who they belong is in a relationship with LaToya.

Cynthia arrives to set up a pop-up for her business and other black-owned businesses. Porsha has set up a table. Marlo arrives and buys sheets from her. Kandi arrives and sees Drew. Drew shares the news about LaToya hooking up with the prophet. Kandi cannot believe this.

LaToya shows up. All of the ladies end up at the same table, drinking wine and talking. LaToya’s new relationship is brought up. She plays dumb. Drew shares that the prophet himself told her. LaToya looks defensive and annoyed. She tells Drew to shut up. Drew shares how the prophet has his own family and now she has broken up a family. Kandi thinks Drew shouldn’t care. She wonders if maybe the prophet is praying on LaToya. Drew and LaToya continue to fight. LaToya leaves after Drew tells her she sounds dumb.

Kenya calls to tell Cynthia she had her breasts reduced. Later, Cynthia and several of the girls come over. They bring presents for her daughter and a drink. Marlo orders food because Kenya didn’t have anything for them. They all Sita and talk about her breast reduction and her ex who wants to go to counseling. They get into the LaToya and Drew fight.

LaToya thinks she needs to leave her alone and worry about herself. Drew can get another prophet to bless her baby. She then decides to call him. The prophet is on video and tells them all that he did not have a relationship with LaToya. He is also not engaged he tells them. They all laugh. LaToya tells them all they have now heard the truth. Kandi knows someone is lying. Kenya thinks none of this makes sense.