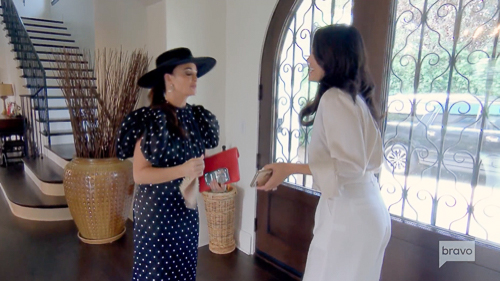 Tonight on Bravo The Real Housewives of Beverly Hills airs with an all-new Wednesday, June 16, 2021, season 11 episode 5 called “The Divided States Of Erika,” and we have your RHOBH recap below. On The Real Housewives of Beverly Hills season, 11 episode 5 as per the Bravo synopsis, “Election night takes a turn when Kyle and Dorit’s past issues resurface. Erika’s shocking announcement is the topic of conversation at Sutton’s Paris-themed luncheon, as the women seek answers trying to make sense of it all.

Meanwhile, Crystal opens up about a difficult period in her life, and Lisa gets a thrill playing with her hubby’s firehose.”

In tonight’s The Real Housewives of Beverly Hills episode, there are so many layers to this divorce. Erika even calls it complicated. This is the same woman who played this so close to her chest that no one thought she would be filing for divorce much less thinking about it and so the group text had caught everyone by surprise.

It right as the election was going down. Kyle invited all the women over to her house to watch the election and Garcelle couldn’t make it because she was staying home to watch it with her boys. However, everyone also showed up and most of them adhere to the dress code. Kyle asked them to dress patriotically. Dorit showed up dressed as Cher in “Clueless” and it was in green. She looked like she was celebrating the Irish, not the Americans.

Never mind the tension between Dorit and Kyle. They got into a spat on board the plane home and they haven’t spoken since then and so they both talked to their husbands about it. Dorit’s husband PK told her to speak up if she doesn’t like something. PK said she would talk to Kyle, but before that could happen, the ladies discussed the divorce.

They were all curious. It took them by surprise at first and then Kyle realized the issues in the marriage and that’s when made sense for her. Kyle also wanted to know why Erika hadn’t said anything. She waited to say it in a text when they had been on vacation together and she could have said it then. The ladies all talked about that. It was also mentioned that Crystal wasn’t eating much on the trip and so she explained her food issues.

Crystal is a recovering bulimic. She will always have a complicated relationship with food and it’s not made any easier by all the stress she was dealing with on the trip. That’s why she wasn’t eating. She’s eating now and her husband Rob got to meet the other husbands. They were both in a good place now amongst friends and again everyone was excited about what the elections could mean. They didn’t want another four years of Trump.

Kyle and Dorit did find time to talk and it hadn’t gone well. They got into another argument because Kyle said if Dorit ever yelled at her as she did on the plane that it would be the end of their relationship. And that was so hypocritical of her because she’s worse things to Dorit.

Dorit reminded her of those things. She also was feeling hurt and so she made her excuses and she left. Her father was in town. She needed to be with him and so she said goodbye to everyone. She didn’t mention the fight with Kyle. She just said she had to leave because of her dad. Dorit left and Kyle admitted that there was tension but soon that didn’t matter anymore because election night was a bust. It was too close to call for anyone.

The ladies had to go about their lives normally and by that, it meant they went shopping. Sutton and Garcelle went shopping for Sutton’s new car. It’s the first car she’s ever bought without asking anyone for permission first and so she went all out. She got a Porsche.

While Sutton was enjoying herself in a new car, Crystal was talking about Sutton with her husband. Rob is very laidback. He met Sutton at Kyle’s election party and he liked her. They had a mutual friend. Sutton had been nice to him. Rob, therefore, thought Sutton was a nice person. Crystal, therefore, thought Rob was too forgiving for a person and that’s why they have separate parenting styles. She was a hard parent. She dished out the punishment and she wasn’t a part of the kids bonding time with their father. Rob and the kids would watch a movie from the 40s every week. It would be just the three and Crystal would make popcorn for them but she wasn’t otherwise a part of the experience.

Crystal had other hobbies. All the women had hobbies. Lisa took up gardening after her husband had the bright idea they should have their own garden if things get too bad during the pandemic and so she helps him when he’s not helping her run fire drills. The ladies were also attending a Parisian-themed lunch at Sutton’s house. Sutton was renting from Kyle and she made the house her own. Kyle was even envious of the house when she saw it. She loved how Sutton decorated it and she later claimed Sutton stole her house while Lisa stole her look. Lisa showed up at the luncheon wearing the same outfit as Lisa. And so everyone had a few laughs about that one because it was just too funny not to laugh.

The ladies spoke of Erika. Erika was expected to arrive at the lunch and everyone wanted to know how she was doing as well as why she didn’t wait. Her husband is 82. Garcelle figured he didn’t have long and that Erika could have kept in it until then.