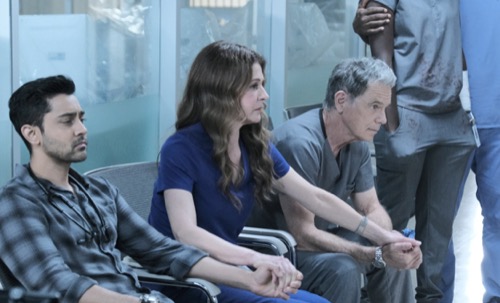 Tonight on FOX their new medical drama The Resident airs with an all-new Tuesday, February 9, 2021, episode and we have your The Resident recap below.  On tonight’s The Resident season 4 episode 5, “Home Before Dark”  as per the FOX synopsis, “With Chastain on the verge of shutting down due to the sale by Red Rock, Conrad tries a last-ditch effort to save the hospital; the doctors plan for their next career moves; Nic is injured by a deranged patient.”

The Resident season 4 episode 5 air at 8 PM – 9 PM ET on FOX. Make sure to bookmark this spot and come back for our The Resident recap! While you wait for the recap make sure to check out all our television recaps, news, spoilers & more!

In tonight’s episode Conrad texts his father Marshall and tells him that Chastain is sold and will be turned into condos. Marshall thinks financial Red Rock made a good decision. Conrad asks him if he would consider putting together a group of people to take over the hospital. Marshall says his resources are tied up right now, he can’t help and not everything in life can be fixed. Then Conrad asks Marshall how he feels about being a grandfather.

Randolph and Kitt are walking around the hospital, she asks him how many patients are left, she says only a hand full. Devon and Irving are outside the hospital, people are protesting outside. A man walks up to them and says he needs a doctor, they tell him that they can’t help they are closing down.

Henry, a patient has received a delivery of a figuring that he ordered Devon tells him to stop ordering the hospital is closing down. Henry is looking for a heart transplant. Devon tells him that he is being taken off the list for the transplant, he will recommend a hospice. Henry says there must something else they can try, he wants to speak to Dr. Austin. AJ visits Henry and tells him the same thing.

Nic has an ultrasound, Conrad is with her. Meanwhile, AJ finds Mina emailing her new employer in Boston. He asks her what is going to happen to them now, she tells him to go to Boston with her. She can see them in a little house, snow failing down, a fire place, he laughs and says it sounds like heaven.

Barrett wakes up, Kitt is there, he starts moving around and she tells him that she is going to have to sedate him for his own good.

Nic and Mina are walking around the hospital, Nic tells her she is past the first trimester and doesn’t find as scared. They see a man at the reception, he says he needs a doctor, he needs help. He is addicted to Ativan but has been clean for two days. He sees Mina reach for her phone and thinks she is calling the cops, she says no, she is just calling for help. He pulls out a knife, slashes Mina in the arm and when Nic turns around, he stabs her in the back then runs.

Conrad comes running, there is blood everywhere, Nic is almost passing out and he tells her to stay with him. They arrive with a stretcher and take Nic right into the ER. Devon is there, Mina and AJ, Devon tells Conrad to back away. She stops breathing and Conrad hits her on the chest, they have no defibrillators. They ready the operating room, everyone is in there now, but Kitt is with Conrad and he tells her to call his dad.

Nic is in surgery, Conrad is observing from above, he still has Nic’s blood all over his hands. Nic’s father shows up the hospital, Marshall sees him coming in and tells him that she is in surgery, then he lets slip about the baby, Nic didn’t know she was pregnant and almost falls to the ground in shock. Kitt goes to see Conrad in the observation room, she says Nic lost a lot of blood, they won’t know her neurological state until they wake her up.

They are wheeling Nic to ICU and Barrett is awake again, he tried to lift his hand and knocks his chart on the floor, he waves his hand but nobody sees him. He pulls out the tube of his ventilator and falls on the floor. Kitt and Randolph notice and take care of him, get him back to bed. They tell him that he can’t breathe on his own and if he does it again, they are going to have to strap him in.

Conrad is watching over Nic, Devon tells Irving that it doesn’t look like Nic is going to wake up soon, she may have had a catastrophic brain injury in the ER, they don’t know but it’s not good. Mina spoke to the transfer centre, there are no beds available right now for Nic. AJ says someone should get Conrad out of there for a moment so they can take an ultrasound on the baby. Mina says it is her fault Nic is hurt, she is responsible. Kitt tries to comfort Nic’s dad, he says he is ok and he has to be, for Nic. The two fathers and Conrad are in with Nic. Kitt says they can lose their hospital, but they can’t lose each other.

Irving is with Henry, Devon walks in and asks Henry if he is packed up, not yet. Henry says he heard about Nic, this is a dark day indeed. She dropped by almost every day to see in the six months that he was at Chastain.

AJ stiches up Mina’s arm, he tells her that he made up his mind, he will find work in Boston, she says good, she can’t lose him.

Kit is with Barrett, he writes on a board to talk and asks how Nic is doing, he says he wants to help.

Devon tries to calm down Conrad, he tells him to think like a doctor not like a husband. Conrad remembers that Nic had a blood test earlier in the day, they go find the results and find that she is having a thyroid issue, Conrad says they need to get her on a thyroid replacement and steroid right away.

Henry drops by Nic’s room to say goodbye to everyone, he leaves one of his figurines for Nic to give her luck, he tells them that they are like his family. Henry sees Barrett and leaves one of his figurines for him too, it is reckless Randy. Barrett asks what is wrong with Henry and AJ tells him the sad story. Barrett writes down that he suggests that they treat avm like a brain tumor. AJ tells Ronald and says Barrett might be down, but he is not out.

Nic is waking up, she asks about the baby, Conrad tells her to rest. Nic is awake, Conrad goes to get an ultrasound machine to do an ultrasound on her. Nic says there is no heartbeat, then they hear it and everyone is happy.

Randolph is with Marshall and Kitt, he tells them that they need to move Nic, Kitt says there are no beds, but she called in a favor, they might get her one in the morning. Marshall says the escrow hasn’t passed yet, so might just be a hail Mary. Kitt says that since Randall is governor now and she was a patient there, is there any chance that the county would take over. Marshall says the budget would be tighter and they would have to take in everyone who walked in the door.

Randolph and Marshall meet with Randall, she thinks it is a good idea, Randolph tell her that the doctors will run the hospital. Meanwhile, Henry had surgery, no hospice for him and he will have many years ahead of him. Devon walks in and tells AJ and Mina that Chastain got a hail Mary, they are going public, they are still alive. AJ tells Mina that they are going to work out her visa too, it is a happy ending for Henry and Nic. Barrett is transferred and he doesn’t seem happy about it.