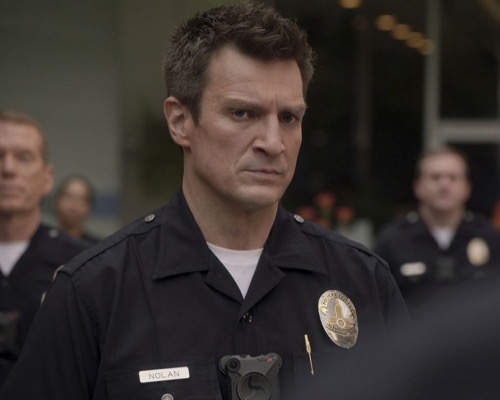 Tonight on ABC their new series The Rookie airs with an all-new Sunday, January 10, 2021, season 3 episode 2 called, “In Justice,” and we have your The Rookie recap below. On tonight’s The Rookie season 3 episode 2 as per the ABC synopsis, “Officer John Nolan and Officer Nyla Harper are assigned to a community policing center to help rebuild their station’s reputation in the community. Nolan is determined to make a positive impact but Nyla has her doubts.”

Nolan has repaired the wall from the damage, Lucy is burning insense to get rid of the bad vibes and Jackson is also there to help. Lucy says it is not fair that Grey is holding Nolan back, he says it is ok, actions have consequences. They head out to Lucy’s car, its not there, someone stole it.

Nolan shows up at the station with Harper, Grey tells everyone that there are new rules, he goes over them. Chen mentions to everyone that her car was stolen, if they could keep an eye on it. Lopez shows up for her new job as a detective. After buying her new outfit, she is told that it is wrong, her pepper spray and badge can’t show. And also, the newbe is on coffee run.

West is in the car with his new partner, Stanton. They talk a little bit about personal lives while they are driving. They see a guy pulled over on the side of the road with a car problem, stop to help out.

Lopez gets her first case, her boss tells her newbes bring lunch too. She heads to a funeral home and there is this weird smell, she asks the owner if he cremated someone in the last few days and he says no. When she opens the incinerator there is ashes inside, she asks him who is that.

Nolan is outside handing out flyers, when he sees a guy smash a window of a car and steal something from inside. He calls it in and starts to run after the guy. Stanton and West hear the call and also help. The guy is taken down and arrested. Nolan is walking back to the station and finds a park with a bike lock on the fence, he borrows a wire cutter and cuts it off.

Lopez gets in trouble from her superior about the funeral home, he tells her that there is no DNA after something goes through that so she doesn’t have a case.

Bradford and Chen stop because a woman is shouting at a man in her car. Bradford asks her if she can get the man out of the car without using a weapon. Chen gets him out of the car and tries to calm him down. Chen calms the guy down and gets him to apologize to the woman. Then, she asks her if she seen her car, show her a picture. They find her car, a seventeen year-old girl stole it and she is living in it.

Chen tells her that she needs a place to stay and it is either jail or a shelter. Chen promises to help her and Stanton makes fun of her. Meanwhile, Stanton and West head to a home burglary, Stanton starts giving the young boy a hard time and West doesn’t like it, so he offers to take the report himself. Stanton says ok, but the report better be bullet proof.

A young man comes into the police station and tells Nolan that they put the bike lock on the park gate to stop the children from going in because drugs are dealt there at night and they don’t want their children finding dirty needles on the ground.

Nolan is in he park, he is changing the lightbulbs when the young man finds him. He asks what is going to happen when they break the lights again, Nolan says there will be cameras up to catch the people. The young man says great, more young black men in prison. He tells Nolan that the cops should stop picking on them and keep meth out of their neighborhoods, anything else is a waste of time.

Tamara, the girls who stole Chen’s car, left the shelter over the night. She wants to find her, but tells West that her partner is giving her a hard time, calling Tamara her puppy. West tells her about how Stanton spoke disrespectfully to the black family the day before where they responded to the burglary.

Stanton and West are packing their car, he tells West that he pissed him off the day before. Then he asks him if he knows the significance of the dot tattoo on the young man’s wrist. It is a gangster tattoo. Then he gives West a book, “Understanding L.A. Gangs & Gang Culture.”

Nolan tells Harper that he put up the lights, she tells him that she knows his heart is in the right place but he can’t come off as some kind of saviour. She tells him to stop thinking he knows what they need, just ask them.

Lopez interviews Mr. Marth, he used to work for the funeral home. He says he can’t remember, but his pay stub shows that he worked there two months ago. She gets him to admit that he broke in, but he didn’t do anything wrong, he just burned the body like all the others. She reads him his rights. She calls in her supervisor. He says he burned a couple of bodies. He did it for K Town mafia, and he will need witness protection. Her supervisor tells her good work.

Nolan gets a call from Hugo, a guy he has been speaking to in the neighborhood and promised to send home reno jobs to. Hugo calls Nolan and tells him something is wrong at a job, after a few details, Harper and Nolan figure out that he is working int a meth lab. They track the GPS on his phone, call for back up and head out. Once there, they find Hugo and some other men inside. Some gasses go off and they manage to pull out a lot of people, but not all.

Chen finds Tamara, she tells her that she will giver her the car, if she checks in with her once a day, and she will find her a place to live.