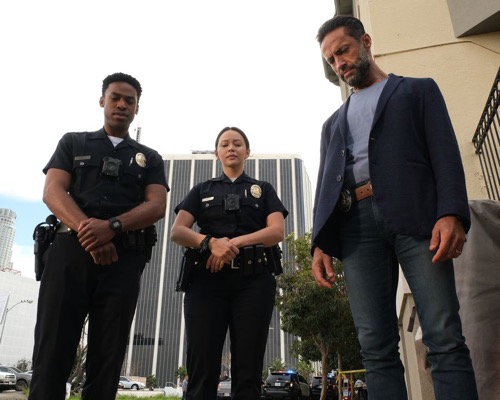 Tonight on ABC their new series The Rookie airs with an all-new Sunday, April 11, 2021, season 3 episode 9 called, “Man of Honor,” and we have your The Rookie recap below. On tonight’s The Rookie season 3 episode 10 as per the ABC synopsis, “Harper and Nolan respond to a bank robbery in progress and realize the motives of the thief run much deeper than just needing money.

Jackson and Chen’s first day riding without training officers isn’t what they thought it would be.”

In tonight’s The Rookie episode, Officers Nolan, Chen, and West became friends at the Police Academy. They all believed they would go through to become police officers together and unfortunately, Nolan suffered a setback. He wasn’t going to be finishing his training at the same time as his friends. He was going to be a month behind them and so he was still a Rookie while they were off of parole in a sense. They were classified as P2s.

Nolan was still a P1 and it hurt that he wasn’t getting to get promoted like his friends. It also hurt that not everyone knew about this before they made big trips. Nolan’s best friend Ben came back to town. He came back because he thought Nolan was going to be promoted and he even brought along champagne.

Nolan had been forced to break the news. He told his very wealthy friend that he doesn’t get promoted until next month and so Ben said that was okay because they could celebrate Henry’s new job. Only Nolan didn’t know his son Henry got a new job or that he would be working with Ben. Ben didn’t tell Nolan anything else about his job and it wasn’t until he was at work the next morning that Henry called his dad back. Henry did get a new job. He was going to be working full-time for his Uncle Ben and he was also going to be dropping out of college. This freaked out Nolan. He doesn’t want his son to make the same mistakes he did and so he wanted to talk more about this, but he had to go to work and he couldn’t risk making personal calls with Sergeant Grey around.

Grey has always had it out for Nolan. He made fun of Nolan for being the oldest rookie and he told Nolan that he’ll also hold the record for being the longest rookie if he didn’t get off his phone. Nolan had to hang up with his son. He was going to talk to him once he finished with work and in the meantime, he complained to Harper. Harper thinks Nolan is overthinking things. She thinks the job with Ben might be just what Henry wants, but funnily enough, she didn’t want to imagine what she would do if it was her own daughter who wanted to drop out of school and so she changed the topic. She asked Nolan if he had any camping gear. He does and he was willing to loan it to her because she needs it when she goes on a camping trip for her daughter’s Girl Scouts trip.

Harper is also wondering what she should do to look good on this trip. She had sorta started something with a fellow parent and the two were supposed to go on a date. She and Alonzo had set everything up when work called. She canceled on him and so they rescheduled, only he canceled on the second date and she thought it might have been a revenge cancel. She now wants to look good in front of Alonzo on this camping trip though there was a problem. She didn’t know how to look good while camping. Nolan was also no help and before long the two were responding to a call. They were called to the scene of a bank robbery. A guy showed up with a gun and he took two people hostage.

Nolan was able to connect with this man. The bank robber identified himself as Cooper Hicks and he claimed he didn’t have a choice. Which Nolan didn’t understand. Nolan was convincing him to give himself up when a security guard got trigger happy and he shot Cooper. Cooper was packed off to the hospital. Nolan and Harper meanwhile went to go speak with Cooper’s family and so they went to this man’s home only to find the place deserted.

The door was open. The new pint of ice cream was left out on the countertop. There were also no signs of Cooper’s family and so the police officers called it in. They handed over the case to the detectives because it was the detectives’ job to investigate what happened to the Hicks. And that was a problem for Nolan

This case got under Nolan’s skin. He wanted to know what happened to the Hicks and he tried to talk Harper into going along with him but she reminded him that this part wasn’t their job. They did what they were supposed to. They now have to let it go. Harper went on her camping trip with her daughter and she managed to find the time to flirt with Alonzo over the campfire. Nolan all the while had made plans to hang out with Ben.

The two had planned to go to dinner and they ended up getting into a fight before they could leave the house. Nolan was upset Ben offered Henry a job. He wanted his son to finish school and Ben said the only reason he wanted Henry to get a degree because he himself resented dropping out because his girlfriend got pregnant. And so after that, Nolan didn’t want to eat dinner.

He stayed home brooding. He wasn’t the only one alone because Lucy Chen had planned on celebrating her promotion with her parents and they both let her down. Her father chose to do his book club instead. Her mother was also disappointing because she tried to talk Lucy into getting a “real” job and she didn’t care that Lucy loved her life. She was happy. Her parents were not. They thought cops were paid thugs and they didn’t want that for their daughter.

Her mom told her to go back to school. Momma Bear even tried to sell Lucy on the idea of becoming a doctor because she thought doctors genuinely help people and cops do not. Lucy got so upset that she threw her mom out. Lucy didn’t get the benefit of having two parents that were proud of her and that’s something West didn’t have to worry about.

West’s parents took him out to a celebratory dinner. He was still talking about it the next morning at work and Lucy became jealous. She wishes she has parents like that. She also asked if West’s parents could adopt her and West thought she was joking but she wasn’t joking. The two officers were still talking about as Bradford was stepping into his new position. Bradford agreed to become Lopez’s Man of Honor and part of the job was firing her last Maid of Honor.

Which wasn’t a problem because Gretchen didn’t mind being fired. Gretchen has been the one dealing with Lopez’s future mother-in-law Patrice and Patrice is overbearing. She gave a huge folder of approved vendors to Gretchen. Along with a cell phone so that Patrice can contact her at all hours of the day.

Bradford was going to have his hands full dealing with her. His former pupil was also having a busy day because Nolan didn’t drop the investigation into Cooper’s family. Cooper died but no one has seen his family and so he found out where his wife Alice worked. She worked in the diamond district. Nolan convinced Harper that they could swing by and that it wouldn’t be a mess and it was. Nolan spotted Alice. She was being let out of the back of a van and so that helped him put everything together. He realized that Alice and her daughter had been kidnapped. The people behind it had looked at the Hicks’s expensive house and had thought they had money when they didn’t. They were deep in debt.

Cooper probably told them he could get the money by robbing a bank. Only that was a failure and so the next plan was to use Alice to rob her employers. Nolan caught her before she could carry out the job. He asked her for any information she could give him and his friends on the kidnappers. She told them she was in a car for about ten minutes and that she was on the freeway for most of it. Using that information, West and Chen was able to locate the house Alice and her daughter had been held in and they rescued the little girl. Nolan and Harper arrested the kidnappers that had been with Alice and they all closed the case.

Nolan, Lucy, and West were reminded why they chose this job to begin with. They live to protect and serve. West later gave Lucy an amulet of St. Michael. It was a thing in his family. They gave out the amulets to new P2 police officers and West wanted to include Lucy in the tradition. He knows what happened with her mother. He also warned her mother that she better apologize or she’s no longer welcome in their apartment.

And Nolan later made up with Ben. They were best friends and Nolan knew Ben would be looking out for Henry.

And Harper finally went on that date with Alonzo.