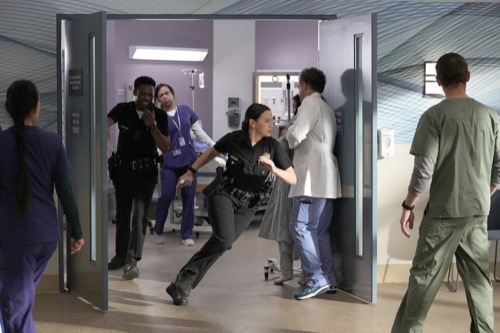 Tonight on ABC their new series The Rookie airs with an all-new Sunday, May 2, 2021, season 3 episode 11 called, “Brave Heart,” and we have your The Rookie recap below. On tonight’s The Rookie season 3 episode 10 as per the ABC synopsis, “After rushing his son to the hospital following his collapse, Nolan is reunited with his ex-wife.

They must come together to help their son; Detective Lopez discovers La Fiera is in the same hospital and wants to find out exactly why.”

In tonight’s episode of The Rookie, Officer Nolan raced his son to the hospital. Henry had passed out while they were having dinner together and with Henry’s fiancé however, this wasn’t the first time Henry was ever ill. Nolan informed the hospital that his son has had five surgeries on his heart when he was little. He himself became an expert

in everything that could be wrong and so he quickly understood the doctors once they mentioned it could be a pulmonary valve. Nolan has done research on it. He also contacted his ex-wife while he was at it. She flew out to be with them and so the family heard back from the doctors together. They heard that Henry could have either of two surgeries. He could have open heart surgery now or they could put in a stint and he could have open-heart surgery five years from now.

Henry was leaning towards the open-heart surgery now option. His mother and his fiancé on the other hand hadn’t liked the numbers they were given. They were told there was a twenty percent chance of mortality. Which wasn’t going to work for them because Henry is very much loved. His family doesn’t want him to die on an operating table before he ever got the chance to live his life and so the majority wanted to go with the easier option.

It was Henry himself who wanted to risk everything with open-heart surgery. He didn’t want to put a stint in because he knew it would mean he’ll eventually have to have surgery at a later date and he just wants to get everything over with. Nolan meanwhile doesn’t know what he’s rooting for.

He just knows he doesn’t want to lose his son. Nolan cleared his time at the hospital past his boss. Usually, rookies didn’t get time off and so Nolan was only be given this opportunity because his son was so sick. Henry later flatlined. He almost died in front of his loved ones and they have to resuscitate him to get him back. Nolan came to a decision when he saw his son almost die. He realized that they have to go along with Henrys’ wishes because to do anything else would be a betrayal.

Nolan informed the doctors that they agree with open heart surgery and that’s what’s going to happen. Nolan, his ex-wife Sarah, and their future daughter-in-law were lying around when elsewhere in the hospital there was drama. A drug kingpin was lying on his death bed and he was accepting visits from La Fiera.

La Fiera was also a known Narco. She was also friendly if not on friendly terms with Lopez. Lopez was at the hospital for a checkup with her baby and she had her fiancé Wesley reschedule while she talked to La Fiera. La Fiera remembers her from the college tour. She said she was at the hospital because her son tore up his ACL and he was going to need surgery. La Fiera made it out that she was just there for her son, but her son could have gotten his surgery literally anywhere else.

She was at the hospital for Senor Madrigal. Madrigal also has a son. His son doesn’t know the business as well as he does and he’ll lose the empire in less than a year. La Fiera understood this. She offered to take over Madrigal’s empire in return for paying his son a royalty fee and seeing that he’s always safe. And so the two were reaching an agreement while Lopez and Harper were listening in.

The LAPD detectives got the go-ahead for a wiretap. They used that to listen in on a dying kingpin and it also helped them keep an out for a former member of their order. Mack Daniels was the one guarding Madrigal. He lost his job as well as his pension when Bradford reported him for drug use. He’s now paid security and he told Bradford he had to take the job to pay the alimony and child support that his ex-wife was hitting him with.

Mind you, this was the same woman that shouted at Bradford for turning Mac in and she’s since proven to be just as loyal as Bradford because now she left Mac too. Mac was now a bodyguard. He was watching the same people he used to arrest and so others have taken over the watch.

Lopez and Harper were spying on the meeting when La Fiera mentioned Wesley. Lopez began to panic and she went looking for her fiancé. Thankfully, he was okay. He had been led outside and threatened but was otherwise okay. Wesley understood the threat. He knows they did that to get him to tell Lopez to drop the case against La Fiera and he did try to do it. He talked to Lopez. He told her that it would be safer handing this case to someone else and she refused to do it.

Lopez said she has to see this case to the end. She got La Fiera on tape speaking cryptically about taking over Madrigal’s territory and that could give them a warrant to keep a closer eye on La Fiera. Lopez was having words with her about possibly leaving the life behind when they were attacked.

Mack eventually lost his client when he died. Bradford caught up with him and he told him he needs to go to rehab. He has to go for himself as well as for his family and so he got through to Mack. He has to put away the pills. And Bradford also asked Mack if he knew a great place to hold a bachelorette party, but Mack had nothing, and Bradford’s only idea was shot down by Lopez herself.