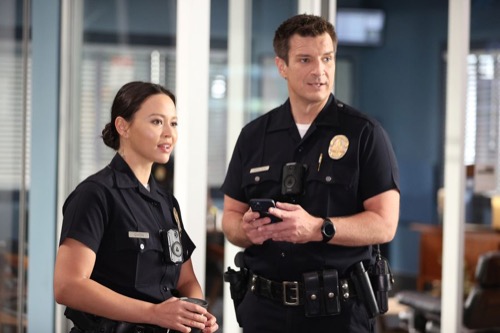 Tonight on ABC their new series The Rookie airs with an all-new Sunday, October 3, 2021, season 4 episode 2 called, “Five Minutes,” and we have your The Rookie recap below. On tonight’s The Rookie season 4 episode 2 as per the ABC synopsis, “Officer Nolan and Officer Chen’s run-in with an infamous thief tips them off to a potentially big heist surrounding the Getty’s big gala event. Meanwhile, Nolan works up the courage to ask Bailey out on a date.”

Officer Lucy Chen took in Tamara. Tamara was the homeless teenager that Chen sympathized with after Tamara stole her car and so now the two are living together. Chen gave Tamara Jackson’s old room. They were now decorating it together and it was a nightmare. Chen vetoed every one of Tamara’s decisions for one reason or another. She also couldn’t make up her own mind about what color to paint the room and she even managed to make Nolan crazy with her indecision. He later called her out on it. He told her that Tamara made a decision and that maybe she should listen to the teenager. Chen is one of the most insightful people that Nolan knows. He told her that the real reason she was dragging her feet on decorating was that she wasn’t ready to let go of Jackson’s old room and that’s okay. She was grieving.

Jackson’s death hit all of them hard. It’s okay if Chen needed more time before she wanted to change the last thing she has to remember is Jackson. Nolan was telling Chen so as they spotted a speeding vehicle and pulled the person over. The person was driving one of those Italian cars. They were going seventy in a forty lane and so Nolan asked for the driver’s license and registration. Now, here’s things get interesting. The female driver asked Nolan not to overreact once he identified her and he said he wouldn’t do anything of the sort. Then he did. He found out that Claire Ivey was wanted in several million-dollar robberies over twenty years and her being in town during their busiest weekend couldn’t mean anything good. The police officers have warned the same mother that it was going to be hectic.

Bradford spoke at the meeting as an acting Sergeant. He’s been promoted since the whole kidnapping with one of his best friends. It was therefore Bradford who informed the squad that with several sports events in the one weekend that it was going to be hard to respond to every call and so Ivey showing up during this same weekend couldn’t be a coincidence. She was in town for a heist. Nolan reported it to Gray and Bradford. They told him to tell her that she’s being heavily watched and that leaving town as fast as possible was her best bet. Nolan passed on the message. Not that it did him much good because Ivey claimed to be innocent. Her claims of innocence sounded like the new recruit.

The new rookie that Harper was training was Aaron Thorsen. He was a rich TikTok kid who may or may not has murdered his roommate in Paris. Aaron was officially exonerated of the murder after multiple trials. But people still look at him with mistrust. Harper certainly did and she resented being his training officer. She didn’t think Aaron should have been allowed into the academy much less onto the force. It seems he had to sue to get fair treatment. He was allowed into the academy and he proved to be a diligent student. He was at the top of his class. He told everyone that he doesn’t blame them if they judge him and that he promises to always have his back and so the only one who didn’t want to give him a chance was Harper.

Harper was Thorsen’s CO. She didn’t like him. She thought he killed his roommate and got away with it. Harper did everything to try and convince Thorsen to leave the police force. She even called them finding a dead body on day one a bad omen. Thorsen hadn’t handled it well because he had a panic attack and he later vomited after finding the dead body. It apparently reminded him of when he found his roommate dead. The story with the roommate was quite simple. Two privileged kids taking a year off in Paris were living together until one day one of them was murdered. The kids had known each other since childhood and they were best of friends until they lived together. Living together was the problem. They complained about chores and who did what. And Thorsen’s friend Patrick was a lady’s man who often brought home a new young woman.

Then the murder happened. Thorsen went into Patrick’s room and he found him dead with his throat slit. The police thought it was Thorsen. He was young and black. The police never truly looked at the young woman that had been with Patrick in the few moments before he died or the woman’s jealous boyfriend. The police went straight for Thorsen. His first defense had been crap and so a second trial got him out of prison. He flew back to the States. He became a cop and now he wants to make sure no other innocent person gets sent away to prison. Harper had doubted Thorsen. She didn’t think he would be good at the job and she did her best to undermine him the whole time she was training him. And somehow he survived it all.

Thorsen held on. He also proved useful. Thorsen was the first person to realize Ivey’s plan before she could put it in motion and it tied in with the body he and Harper found. The body was that of a celeb stylist. She knew who was borrowing what jewelry and when the jewelry was going to be delivered. Ivey killed her to get her hands on the schedule. She then put together a team and they plan on robbing the armored truck that was going around to deliver the goodies to the celebs. Only with Thorsen’s warning, the police were able to set a trap for Ivey and they stopped her and her crew before they could steal a single thing. And so the famous Claire Ivey was taking down by a rookie who figured out her plan.

Nolan meanwhile was pursuing the firefighter he took as his date to Lopez’s wedding and so far things are going well. Bailey agreed to try out dating in spite of claiming not to be all that good at it.